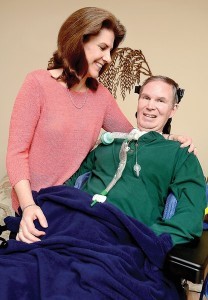 David Muritz of Hagerstown, Md., was diagnosed in 2007 with ALS. His wife, Marsha, is his caregiver. David Murtiz is unable to walk or talk, and is on a ventilator. He also has a computer that speaks for him. (Photo by Joe Crocetta/Staff Photographer / October 26, 2012)

The David Muritz family from Maranatha Brethren Church in Hagerstown, Maryland (Dan Thornton, executive pastor) is dealing with a serious and chronic illness. Here is an excerpt from a story in the local newspaper–to read the entire article click here.

Reality doesn’t get much harder than being diagnosed with amyotrophic lateral sclerosis or ALS.

A cruel and steady wasting of neuromuscular functions that paralyzes its victims inch by inch, it’s often more kindly referred to as Lou Gehrig’s disease — named for the famous Yankee slugger who received his diagnosis in 1939.
But there is nothing kind about ALS.

There is no meaningful treatment. No cure. No magic pill that will reverse the symptoms.

It’s a taker — stealing the body’s supply of strength and agility, the use of limbs and the ability to speak and swallow.

Diagnosed with ALS in October of 2007, he slowly has watched the disease take over his life.

Once strong and healthy, he now spends most of his days in bed, attached to a ventilator.

He no longer has the use of his arms and legs and has very little head movement.

But Muritz’s story is not about one particular disease.

It’s about the individual who, despite the challenges that face him on a daily basis, considers himself blessed.

He is appreciative of the help and support he and his wife, Marsha, receive from relatives, former coworkers and church members.

He is thankful for those who drop by for a visit or stay in touch by email or Facebook.

And he feels lucky to have a computer that speaks for him — tracking his eyes to type out words, which makes living with the disease a little easier.

“I am not depressed,” Muritz, 53, said. “The Lord has given me peace and I trust Him to see me through this.”