Roy Halberg, pastor of the Alta Loma church in southern California, along with his wife, Andrea, has been chosen to marshal the local Fourth of July parade. Here is an excerpt from a local article–to read the entire article, click here. 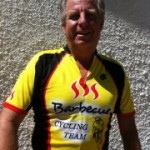 Life has a habit of coming full circle.

Dr. Roy and Andrea Halberg were perfectly content with his ministerial duties and their life in Northern California when he was offered the Grace Church of La Verne pastoral position in 1989.

They didn’t intend to return to Southern California and only accepted the invitation to visit La Verne to be polite.

One overriding factor changed their foregone conclusion and alleviate all their misgivings: They arrived in La Verne on the Fourth of July weekend.

“Did they intentionally bring us down for the Fourth of July? God tweeked our hearts, and we couldn’t think of any reason not to move here. Any problems we thought there’d be disappeared,” Andrea admitted.

“The Fourth of July in La Verne has such significance for us,” Roy said. “The warm hospitality and generosity of residents, activities for children and families, the fanfare, the celebratory atmosphere are simply wonderful.”

Andrea and Roy feel God called them to La Verne, and God hasn’t told them to leave. However, they couldn’t imagine that 23 years after arriving they’d be named grand marshals of the La Verne Friends of the Fourth parade.

Andrea even thought it was a joke when parade coordinator Jeannette Vagnozzi called to inform them of the honor for the city’s largest public event.