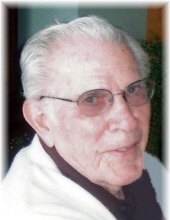 Word has been received of the death of Harold Snively, former caretaker at Camp Clear Lake, the Grace Brethren camp in Naches, Wash., and the twin brother of the late Grace Brethren pastor Howard Snively. His obituary appears below.

He was born in Braddyville on October 28, 1926. He was the eighth child of Ren and Florence Maxwell Snively and the second born of a set of identical twins.

The family moved to New Market just before he and his twin brother Howard started to school in the first grade. He lettered in baseball, basketball, and track. The brothers graduated from high school in May of 1944. They both enlisted in the Navy. After boot camp, Harold studied and passed oral and written exams and was promoted to Seaman 1st class and then to Gunners Mate 3rd Class. He also did a little boxing. Because of these activities, he was assigned to Shore Patrol Duty in Reno, Nev., on a rotational basis.

After being honorably discharged from the Navy, Harold enrolled in the Iowa Barber College in Des Moines. After graduating and passing state board exams he worked for a short time in Bedford, Iowa, and then for Art Stewart in Clarinda. He moved to Rawlins, Wy., in July of 1949 and worked as a barber.

He married Mary Evelyn Morris in August of 1949 in Rawlins, Wy. To this union were born two daughters; Patricia Kay and Bonnie Sue. Harold was always extremely proud of these daughters. They were both National Honor Society students, cheerleaders, and foreign exchange students. They were both on the swimming, track and tennis teams.

Harold was hired by the Rawlins Police Department in 1951, because of his experience as Shore Patrol in the Navy. He enjoyed this work very much. He learned to classify fingerprints, and take and file mug shots. He replaced the Chief and Lieutenant when they were off duty.

However, when he received an offer in 1953 for employment to work for the U.S. Bureau of Reclamation at Seminoe Dam in the operation of hydroelectric generators and high voltage transmission lines, he jumped at the opportunity. This was his choice for a career. He transferred from Seminoe to Palisades Dam in Idaho. He took college courses via night school and extension classes and was promoted to the supervisory and management ranks. From Palisades, he transferred to Flaming Gorge Dam in Utah, then to Grand Coulee Dam in Washington; to the Yakima Valley Project and then to The Central Valley Project Office in Sacramento, Calif. He retired on Jan. 9, 1981.

Harold experienced an epiphany on March 24, 1973. On occasion, he would witness to others and tell them that he had accepted Jesus Christ as savior and God changed his life. He was ever thankful for his salvation.

He and Evelyn became full-time RVer’s for about eight years. They were in every state of these United States and most of the Provinces of Canada, eventually buying a place in Florence, Ariz.

About the time Harold retired, Evelyn was treated for breast cancer with radical mastectomy and chemo treatments. She passed away in August of 1995 because the cancer had metastasized to her lungs.

Harold then moved to Sun Lakes, Ariz., and was alone until April of 2005 when he married Peggy McBride. They were happily married until his death.

Harold was an avid sportsman and loved to golf. He played to a low handicap and had three holes-in-one. He was also a pitcher on several fast-pitch softball teams.

Making a sky dive was on his Bucket List. On Jan. 15, 2012, at the age of 85, he was able to scratch it off the list by making a tandem sky dive from 13,000 feet. He reported that the jump and the free fall was where the thrill was. During the free fall, the falling speed was approximately 124 mph.