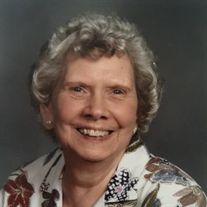 Word has been received of the death of Jeanie Snell, wife of Pastor Bill Snell, who serves on the pastoral care team at Grace Polaris Church, Columbus, Ohio (Mike Yoder, lead pastor). Services will be Friday, February 13 at the church at 8225 Worthington Galena Road, Westerville, OH 43081. Her obituary appears below.

Jeanie was born in Alliance, Ohio, to Eugene Emerson and Helen Elizabeth (Anthony) Swallen. She graduated from Alliance High School (1949) and Moody Bible Institute, Chicago in 1953. Bill and Jeanie married in 1954. Their church ministry journey began in Needham, Mass., and included churches in Meyersdale and Martinsburg, Pa. where they served for 22 years. Moving to Warsaw, Ind., in 1990, Bill served Grace Brethren North American Missions and Jeanie cared for her bed-bound mother. In 2000, they moved to Columbus, Ohio, where Bill serves on the pastoral care team of Grace at Polaris.

While in Warsaw, Jeanie served as author and editor of Serving My Master (SMM) notebooks and lessons for girls ages 5-18.