Helping Out in a Flood 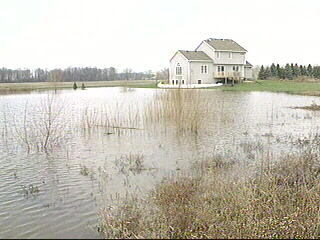 There is widespread flood damage in northern Indiana as a result of recent rains, and one South Bend television station, WSBT, took notice of a Grace Brethren good deed in a story. Here is an excerpt:

ST. JOSEPH COUNTY — Flooding is still a concern for many homeowners. In St. Joseph County, an overflowing pond is threatening homes.

It’s been a stressful couple of days for about a half dozen people in the Heather Lake subdivision.

The heavy rains and melting snow made for a dangerous combination, and one neighbor told WSBT News he wasn’t going to take any chances.

“Another six inches and we probably would have had been standing in a little water right now,” Kois told WSBT News.

Neighbors knew they had to act fast. They used a park bench, which is now under water, as a way to gauge how fast and how much the water was rising.

“From yesterday morning about 8 or 9 o’clock to about 1 or 2 in the afternoon, it probably rose about two feet,” Kois said. “It went up very quickly.”

To help get the water out, the developer put in a pump system.

Neighbors also took action. They put up sandbags around their homes to keep the water from getting too close to their foundation.

“Yesterday the pastor from Grace Brethren Church who lives across the way, he had the members of his congregation sandbag the front of his house,” Kois said. “And I went over to his home last night about 6 o’clock and asked for help.”