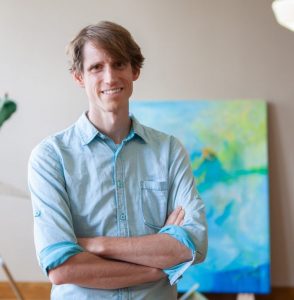 Henrik Söderström poses in front of his exhibit in the Art Gallery of Mount Memorial at Grace College, Winona Lake, Ind.

Henrik Söderström, an artist, designer, and idea enthusiast, will present his mixed media artwork on Sept. 13, 2019, during the opening reception for his exhibit, “Dreaming of linear tunnels in the sky, thousands of permanently underground rabbits pushed and prodded the dirt until their feet were sore,” in the Art Gallery of Mount Memorial Hall, 200 Seminary Dr., Winona Lake. Söderström will give an artist talk at 7 p.m., where the reception will follow until 9 p.m. The community is welcome to attend the free event.

Known for his cross-disciplinary collaborations in multi-media and the performing arts, Söderström was raised in Rochester, New York, by an exuberant Californian and a Swedish optimist. He grew up sanding oak floorboards and eating green peppers like apples from the vegetable garden.

After absorbing inspiration and general excitement about life at the Rhode Island School of Design, he went on to work with Yo-Yo Ma’s Silk Road Project, designing the set for their production of “Leyli & Majnun,” which opened at Lincoln Center, and creating album artwork for their Grammy-nominated recording “Off the Map.”

Henrik created set designs and exhibits for the IDEA Museum, the Society for Freshwater Science, the Grammy-nominated Music of Difference Project, the Knights Orchestra, the Attacca Quartet, choreographer Thomas Warfield, Sandeep Das, and FuturPointe dance. He was an artist-in-residence with I-Park Enclave, the Julia & David White Artist Colony, and the Roger Tory Peterson Institute. 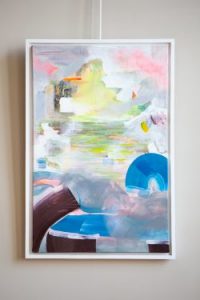 In addition to solo and group exhibitions, Söderström’s collaborative visual and performing artworks have been exhibited and performed nationally and internationally. Söderström holds a Master of Fine Arts from Rochester Institute of Technology and a Bachelor of Fine Arts from Rhode Island School of Design with a concentration in History, Philosophy, and Social Science. Söderström now lives in the Midwest with his wife, Dottie, and his daughter, Lois. He works with Marion Design Co. as an Ideation Designer and teaches at Indiana Wesleyan University in Marion, Ind.

“It is a joy to have Henrik as a visiting artist at Grace College. His creativity and insight are inspirational and the depth of his work allows the curious viewer to find elevated meaning,” said Kim M. Reiff, chair of Grace College’s Department of Visual, Performing, and Media Arts.