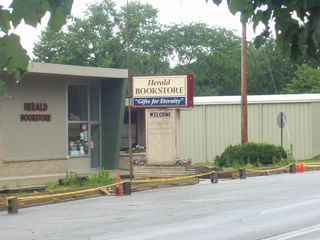 The March/April 2006 issue of FGBC World will soon be arriving in homes and churches. This is one article from the upcoming issue:

The Brethren Missionary Herald Company (BMH) was informed on Valentine’s Day, 2006, that Send The Light, the British-based company that has owned and operated the Herald Bookstore in Winona Lake, Indiana, for the past four years, is closing the store effective April 30, 2006, and is ceasing operations in Winona Lake.

BMH Executive Director Terry White noted that a Christian bookstore has been operated continuously in the BMH building since the facility was constructed in 1956 by then-BMH general manager Arnold Kriegbaum.

“We are, obviously, sad to see this operation close down,” White said, “but we are currently in negotiations with possible new tenants in an effort retain a Christian bookstore for the Winona Lake area.”

BMH is the communications arm of the Fellowship of Grace Brethren Churches, whose mission is “to nurture Great Commission teamwork among the churches and people of the FGBC by building bridges of communication.” FGBC World and its companion website and blog are part of that ministry, as is the publishing of BMH books.

John Leonard, who has been an employee of STL since they purchased the store, will return to BMH as a full-time employee, managing not only the distribution of BMH books but also the sale of church bulletin covers, offering envelopes, Sunday School curriculum, and VBS kits that were acquired as part of the changeover.