Grace College’s first 2018 NCCAA National Champion, Tommy Hickerson, is the topic of a story at the online news site, InkFreeNews. Hickerson won the men’s javelin competition on Thursday afternoon at the NCCAA Track & Field National Championships, which was held at the college’s Bernard and Linnie Key Track and Field Complex. A portion of the story appears below. Click here to read the complete article. 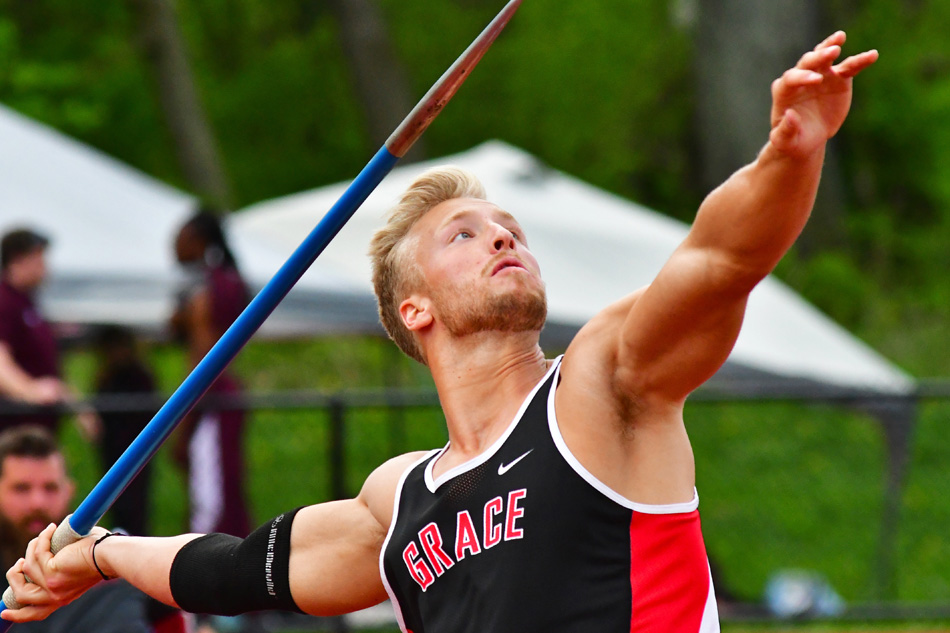 Maybe Caleb Smith was on to something. Stating earlier in the week that Grace College sophomore teammate Tommy Hickerson comes from ‘good genes’, Smith joked Hickerson’s denial of being cut from good stock was laughable.

Well, turns out, Smith was right.

“It was very exciting to end the season on this note,” Hickerson said, who is the youngest of four Hickerson kids, all of which have competed collegiately in athletics. “At conference, I was seeded first and just could not put anything decent together. So getting to end on this note and throw consistent 48s and 49s, it’s very reassuring that I can confidently start chucking them out there. I’ve only practiced for one full year. I’m looking forward to continue training and add a lot more distance if I can stay healthy.”

Hickerson came in as the No. 2 seed in the javelin, sitting behind York’s Jaraad Salas, who had the overwhelmingly top distance to beat of 57.72 meters to just 50.91 for Hickerson. But with a stiff crosswind whistling across the Key Track Complex, sometimes blowing left to right, and other times pushing right back into the faces of the throwers, it was anyone’s guess who would catch a break.

“Obviously I have a little bit of an advantage of throwing here every day, so I know how to work in this wind, which does this all the time,” Hickerson said. “I guess you could call it resistance training. I’m just used to it. I just tried to keep good form and get one under the wind, and I did.”

Hickerson becomes the first track National Champion for Grace since 2010 and only the sixth individual to ever accomplish the feat. Thursday’s win was the third medalist honor for Hickerson of the season, also winning javelin at the Lancer Invite and Huntington Invite earlier in the year. Hickerson’s personal best in the event was set at the Lancer Invite. He was fourth at the Crossroads League Championships.