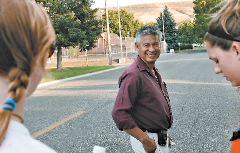 They’re almost like franchises, these small Hispanic churches-within-churches that Abner Solano has spent 18 years establishing in the Yakima Valley.

There’s one in Mabton, the first one. There’s another in Yakima, Grandview, too. Then there’s the one in Prosser, where Solano still leads twice-weekly services.

“I am the seed planter,” the 52-year-old Solano said. “When the church grows, I look for somebody else to take my place, and I move to another.”

All four “churches” he’s started have been supported by the existing Grace Brethren churches in the towns. They were looking for new members and wanted to provide Spanish-language services. Solano was looking for venues in which to spread his evangelical message.

Already an experienced preacher, he arrived in the Valley in 1987, a refugee from civil war in Nicaragua. He expected to stay a short time on his way to somewhere else, but a friend from Yakima told him about the Grace Brethren church in Mabton.

“An ex-missionary from Central America, he told me he knew a church that was looking for somebody for Hispanic ministry,” he said.

Demand for Hispanic preachers and evangelical services in Spanish has been growing for decades now, said Samuel Rodriguez, president of the Sacramento, Calif.,-based National Hispanic Christian Leadership Conference. His group represents nearly 15 million people, many of whom have converted from Catholicism to seek a more personal connection with Jesus, he said.

That “direct” connection is particularly appealing to Hispanics because of their cultural history in Latin American countries, he said.

Evangelicism is growing fast enough that it will overtake Roman Catholicism as the religion of choice for Hispanics in the United States within 50 years, he said.

“And I’m being very conservative in that,” Rodriguez said.

Solano makes it a point to not denigrate Catholicism or any other religion when he recruits people to his church. That’s not his way.

In fact, his most successful means of getting people to attend his services is far from a hard sell. What he does, see, is simply meet people. He meets them in many ways, often through the electronics-repair business he runs out of his home as a day job.

“I try to make contact with them, be a friend first, and ask them if they want to start looking at the Bible,” Solano said. “I spend several weeks with them, teaching. And then I invite them to make a commitment with God.”

The results speak for themselves. He typically starts with a handful of people, maybe a dozen. But by the time Solano moves on to the next church, the Spanish-language service attendance is usually above 50 regulars a week.

“His ministry has outstripped us all,” said Dwight Cover, the head pastor at the Grace Brethren church in Prosser.

Much of that has to do with the quiet force of Solano’s personality, he said. He is honest but sensitive and has an aura that inspires respect rather than demands it. People are drawn to him because of that, Cover said.

It’s important, too, that Solano is the type of person who can take those qualities and spread them, he said.

“It takes somebody that is entrepreneurial, that has enough of a vision … and yet doesn’t have an ego about making it all fly on his own,” Cover said.