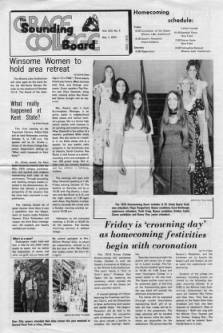 In October 1973, the Grace College Sounding Board announced the members of the Homecoming Court: Cindy Scott, freshman attendant; Hope Hungerford, queen candidate; Carol Balsbaugh, sophomore attendant; Ruth Craig, queen candidate; Debbie Cahill, queen candidate; and Nancy Roe, junior attendant. A meeting of Twentieth Century Affairs Club was announced in which Dr. Orville L. Grisso of the Grace College Education Department would be talking on “What really happened at Kent State?” There were also photos of the members of the senior class who participated in their class retreat at Starved Rock State Park in Illinois.

That issue, along with a number of other editions of the college newspaper, is now available online. They have been digitized and uploaded to the PALNI (Private Academic Library Network of Indiana) Digital Collection.

To access the Grace College collection, which not only includes the Sounding Boards but photos of the Brethren national conferences which were held in Winona Lake, click here.