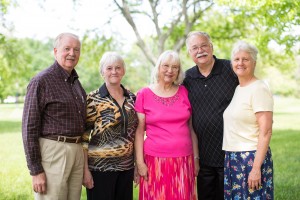 The children of late Christian writer, editor, and filmmaker Ken Anderson (1917-2006) recently presented Grace College’s Winona History Center with hundreds of documents, letters, and artifacts related to the life and ministry of Anderson and his wife, Doris.

“These materials are a perfect fit for the History Center,” commented director Jared Burkholder.

“Anderson’s work was interconnected with Winona Lake’s religious heritage and contributed to its reputation as a regional center for American evangelicalism. It is a privilege that the family has entrusted the Grace College archives with these materials.”

In time, the items will be catalogued and made available to researchers who might be interested in the history of Christian films as a distinct genre, the use of media in evangelism, or in the personal story of the Anderson family. Anderson wrote 77 books and made over 200 films, which were used primarily among Christian youth groups and conference gatherings, including those of Youth for Christ International.

On Tuesday, June 3, representatives from Grace College celebrated the Anderson family’s gift with a luncheon attended by five of Ken and Doris’s children and their spouses.