Hofecker: On Patrol With the 82nd in New Orleans 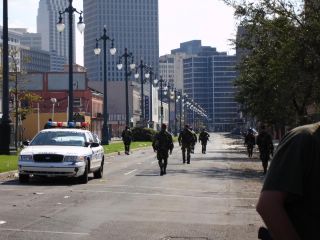 Greetings from New Orleans. Our team leader had to go to Baton Rouge for a late meeting last night so I have a little time. I usually wake up when the engine of the Humvee that protects us at night starts up for them to go back to their base. The Army provides security for us at night (5:30PM to 5:30 AM) but we have to provide our own during the day. We have a detail of sheriff’s deputies and U.S. Mint Police to do this.

The city is getting quieter because of the “Voluntary Evacuation.” I spoke with a Federal ICE agent (Immigration and Customs Enforcement) who told me that his mission was “voluntary evacuation.” In essence, they go block by block with heavily armed federal agents, search for residents (there are an amazing number still here), and talk to them until they “voluntarily” evacuate.

One of our stops in the city has an evacuee collection point and helipad. I think it started Tuesday and there were lines of people. Yesterday, the flow was visibly less. We still run into citizens on the streets, however. One pulled up to the helipad yesterday in his BMW Z-3, which I guess he kept in the garage.

Operationally, I think I can say something general about the NOPD situation without causing any problems. Only a minority of the 11 Districts are in their district offices (we would say “precinct” houses). Some were flooded out and others moved out of their usual HQ into looter targets like Wal-marts or hotels with guests.

At one Wal-Mart, they turned it into a fort by pushing three-foot thick bundles of cardboard boxes up to the doors. I spoke to one female officer yesterday who had not been home for 10 days and had her children in school in Georgia. About a third of the officers I met are homeless and living at their district houses.

I ate at a warehouse along the Mississippi River last night with a specific NOPD unit of about 35 officers. They have their own kitchen set up and eat together every night–it was good Cajun cooking. They stay there 24 hours per day and those with homes or families evacuated only leave for short periods of time.

A psychiatrist and I spoke briefly with Rita Cosby of NBC about the plight of the homeless officers, but I don’t think we got too far. I am sure that news directors make all the decisions about what is important news. About two-thirds of the officers I met either lost their homes or had to evacuate their families out of them.

One got trapped in his attic with his children, had no axe and shot his way through the roof decking until he could kick out the boards. Some of the missing are probably not deserters but are just not so lucky about getting out of their attics.

Their checks are usually deposited into their accounts on Tuesday–this week it did not happen even though they were told it would not be a problem. Still, they stay on the job.

I understand the victims’ assistance teams are running into trouble around the country. A lot of the gang members hid their loot and slipped out of town as evacuees. The authorities wisely did not check for wants and warrants on the way out.

If you go to work in a shelter, please be careful–there are wolves mixed in among these poor helpless sheep. Seems like some folks are always the prey wherever they go.

Today may be our first day without body armor–it figures, since the order from New York just arrived. DHS medics are giving shots and no one is keeping records, so I am keeping track of what I get in my own notebook.

We are finally getting an assessment together of the needs, but we have a lot of work to do before we have a plan. Now we are running into the inevitable bureaucracy. This, too, is part of disaster work.

Team meeting in a couple of minutes. The team leader will be grumpy with so little sleep, so I better go. Disaster work is always like looking through a straw–you only see a tiny part. I am glad to share my little world with you. Pray for us and the brave men and women of the NOPD.