Mark G. Holbrook, who for many years has been a leader and Sunday School teacher in Grace Church of Orange in Orange, California (Mike Sciarra, pastor), was recently honored for his financial leadership and integration of biblical principles in the workplace. Here is a news release about the honor: 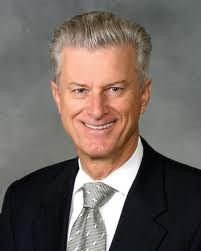 For his long-time dedication and commitment to his credit union, its members, and the industry, the California Credit Union League has named Evangelical Christian CU CEO Mark G. Holbrook as a 2011 recipient of the Unsung Hero Award. The award honors deserving individuals within the credit union industry with at least 20 years of service who also have made significant contributions in the community.

“I am thankful for the privilege of serving ECCU and our credit union industry for so many years, and am honored to receive this award,” Holbrook said. “I humbly accept this recognition on behalf of all the unsung, faithful stewards in our credit unions who labor so diligently on behalf of their members.”

Holbrook was selected for the honor in part because of his years of service as president and CEO of ECCU since 1979 (he started at the credit union in 1975 after graduating from Biola University). Under his leadership, ECCU has grown from $4 million in assets to more than $1 billion and been designated a “Best Christian Workplace” by Best Christian Workplaces Institute for four years (2003, 2005, 2007, and 2009).

His passion is the integration of biblical principles in the workplace, and it shows. He received the 2010 Ethical Edge Leaders of Integrity Award presented by the Passkeys Foundation. And he has served as board chairman for Christian Leadership Alliance and is the current board chairman for the Evangelical Council for Financial Accountability.

The Unsung Hero Award, established by the League’s Historical Preservation Committee, is now coordinated by the League’s Awards Committee. Individuals, chapters, and other League-affiliated organizations, both in California and Nevada, are encouraged to nominate deserving recipients. For more information and nomination form, go to http://members.ccul.org/07publications/hof_unsung.cfm.