Following an afternoon of basketball and soccer, and a campus-wide game of GooseChase, student and leaders came to tonight’s session of Momentum 2016 in exhaustion and exuberance. Once the winners of Momentum’s Got Talent received their scholarships, students and leaders were blessed with two speakers. 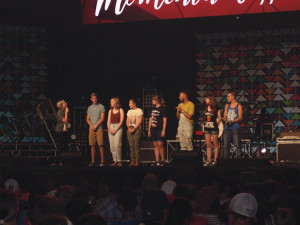 Clancy Cruise, who started Marysville, Ohio, Grace Church in his living room, asked how we can know God’s will for our lives. The answer is to ask Him for His wisdom… a source that proves itself through the decades of your life.

Cruise’s sermon led to the testimony of Christopher Yuan, a first-time speaker at Momentum. From age sixteen, Christopher experimented with homosexuality. He told his parents while they were also considering divorce. His mother contemplated suicide but visited a minister instead. She accepted Christ, followed a few months by her husband. Christopher meanwhile, continued in his lifestyle, using and selling drugs as well. “I had exchanged the truth of God for a lie because, in my world, I had become God.”

This led to his being arrested and sentenced to six years in jail. But out of a prison trash can, Christopher picked up and read the Bible for the first time. He was confronted with his sins at the same time he was told to be HIV positive. Those days were dark, but they led Christopher to the turning point of accepting Jesus.

With the end of his story, Christopher drove home that one’s sexual identity does not make up their 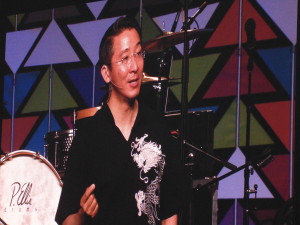 identity as a follower of Christ Jesus. Remembering that ‘unconditional love is not the same as unconditional approval of my behavior,’ we are to focus on living a life of holiness and purity.

God’s plans, as stated in Jeremiah, still existed for Christopher’s life. He applied to Moody Bible Institute and was accepted. His attendance began in August 2001, a month after he was released from a rare, reduced sentence of three years! Christopher graduated in 2005 and went on to secure a doctorate from Bethel College in 2011. He has been teaching at Moody for eight years now. He ended the evening with the sobering reminder that repentance is no one-time act, but a day-to-act. All in pursuit of a holy lifestyle after God.