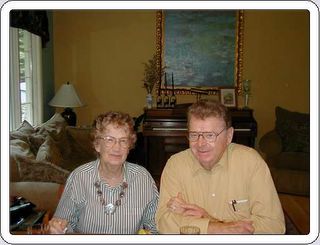 Lyle and Christa Marvin sent along this warm photo of Donna and Homer Miller, with whom they spent time in September, 2005. Here is Homer Miller’s obituary from the funeral home:

Homer R. Miller 76, of Ashland, was released from this life into the presence of his Lord and Saviour on Thursday evening May 11, 2006.

He was known by his family, friends and business contacts as a man of integrity, compassion and was very quick to put the needs of others first during his lifetime.

Homer was born on November 7, 1929, a son of C. Percy and Mary M. McCloskey Miller in Blair County, Pennsylvania. He was a graduate of Morrison Cove High School, Grace College and Grace Theological Seminary.

He pastored Grace Brethren Churches at Lake Odessa, Michigan, and in Ankenytown and Fredericktown in Ohio.

In 1962, he became sales manager for the Ashland Tire Corporation from which he retired in 1990. Following his retirement he and his wife went to Central African Republic to teach. They were quick to learn the Sango language and they became lifelong friends of the African people.

For the past fifteen years, Homer and his wife spent their winters in Arizona City, where he had the privilege of serving his Lord through song and testimony with the pastor and members of the Victory Baptist Church in Casa Grande, Arizona.

He is survived by his wife Donna, they had celebrated fifty-four years of marriage, one daughter, Kathy, sons, Russell and Rodney and his wife Andrea, grandsons, Jacob and Allen Miller, all of Ashland survive him. He is also survived by one sister and three brothers.

A memorial Celebration of Life in Christ will be held on Tuesday May 16, 2006, at 7:00 PM in the Grace Brethren Church Sanctuary with Pastor Norman Johnson officiating. Local friends may call at the church one-hour prior to the services on Tuesday evening. Out of town guests and family will be received in the Circle immediately following the services.

Homer’s desire was in lieu of flowers that memorial contributions in his memory may be made to, Grace Brethren Church, 1144 W. Main Street, Ashland, OH. and these monies will be used for a Mission Project with the Central African Mission.

Denbow-Primm-Kemery Funeral Home is in charge of the arrangements. Online condolences may be sent to the family by visiting www. dpkfh.com.