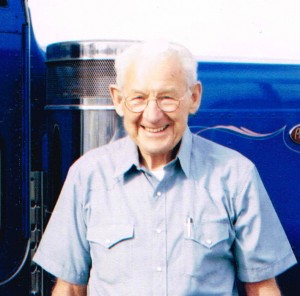 Homer William Waller, age 97, longtime Yakima Valley, Wash., resident went to be with his loving Savior on Monday, May 11, 2015, surrounded by his loving children. Homer was born on Christmas Day, December 25, 1917, in Ephrata, Wash., to Jean Elroy Waller and Ida Viola (Wyles) Waller. During Homer’s childhood his family moved to Wenatchee where he received his education and graduated from high school. While in high school, Homer worked on the construction of the Grand Coulee Dam. He also worked with his brothers Ed and Mel logging in the Wenatchee area. In 1940, he married Lucille Jane Siverly and moved to Pilot Rock, Ore. Their son, Gene, was born the following year. Homer purchased Herrett Trucking from Bill Herrett in 1943. His brothers and two other partners joined him in 1945 and they were able to expand the business over the next 25 years.

In 1968, Homer separated from Herrett Trucking Company and founded Star Mfg. Co. to build custom semi trailers. Both of Homer’s sons, Gene and Dave, joined him in 1970 and continued building trailers. Both Pat and Lucy worked in the office at Star for a time as well. Homer continued to own and operate Star Mfg. Co. for over 45 years. He was an active member of the Grace Brethren Church in Sunnyside. Homer taught Sunday school classes and was a leader in the church on both the local and national level serving on the National Home Missions Board which helps to start and support the growth of new churches. Homer was also actively involved in the construction of the Education Annex and in the building of the new sanctuary of the Grace Brethren Church in Sunnyside. Even as a young man Homer had a deep desire to follow Jesus Christ and to serve him in every aspect of his life as a husband, father and businessman. Homer wanted to put Jesus first and he continued that loving obedient relationship with his Savior growing as a believer in the likeness to Christ. There were many opportunities Homer took to help others. He was grateful for God’s blessing in his own life and wanted to share that in multiple ways with other people. He will truly be missed by all who knew and loved this wonderful man.

Viewing and visitation will be held Saturday, May 16, 2015 from 8:00 am until the time of Homer’s service at 10:00 a.m.; immediately following the funeral service will be a reception dinner, all of which will be at the Grace Brethren Church in Sunnyside, Wash. Burial will follow at Lower Valley Memorial Gardens in Sunnyside, Wash. Those wishing to sign Homer’s online memorial book may do so at funeralhomesmith.com. Smith Funeral Homes Ltd and Crematory in care of arrangements.