It was recently announced that Brian Winter, sheriff in Yakima County, Washington, was diagnosed with Amyotrophic Lateral Sclerosis, or Lou Gehrig’s disease. The son of retired Grace Brethren pastor, Chuck Winter, he will not be seeking re-election. Brian was recently honored by the Yakama Tribal Council. Chuck sent along this report. (Chuck was the longtime pastor of the Grace Brethren Church, Harrah, Wash.) 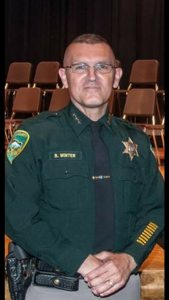 On Tuesday evening, February 13, the Yakama Tribal Council (The Yakama Reservation makes up a large portion of Yakima County, Wash.) gave Sheriff Brian Winter a surprise “Honor Gathering” in a cavernous room in the Event Center at the Legends Casino in Toppenish. Invited were his immediate family, law enforcement personnel, former members of his Marine Company B, and the Tribal Council.

There was a large group of other friends as well to observe the program and enjoy a buffet style meal. The program began with Brian being escorted into the gathering by two ranks of Yakama Indian Warrior Veterans. Those present had been divided into two groups. The ladies on one side and the men on the other, with a large aisle down the center. A group of seven Yakama Indians. Using deer hide drums, sang three Yakama songs honoring Brian.

A procession of Veterans bearing the flags of the various United State Military Departments did the presentation of the colors.

The lengthy program was chaired by the Tribal Chairman, JoDe Goudy, who expressed Tribal appreciation for the fine working agreement they have with the Sheriff’s Office. Other Council Members spoke as well. Several beaded items were given as tokens of their esteem as well as a lovely woolen Indian blanket.

A proclamation from Governor Jay Inslee was read proclaiming February 13 “Sheriff Brian Winter Day.” This was followed by the reading of the resolution passed unanimously by Washington State House of Representatives honoring Sheriff Brian Winter.

Note: The Yakama Indian Nation has officially adopted the name “Yakama” as opposed to the city name of “Yakima.”