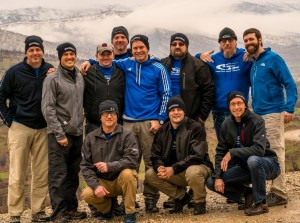 He and a team of 10 other men from the church traveled to war-torn northern Iraq in early January to provide encouragement, relief, and leadership training.

They wanted to build on their previous experience. In September 2014, a team from the Goshen church had traveled to the region with medical supplies and funds for relief work. As they returned home, they arranged to help a congregation in Erbil secure short-term housing for refugees.

On this trip, they led a conference for men in Erbil. A week later, they held a second one in Duhok, more than two hours away.

“We wanted God to use us to reach the men,” he remembered. One of their prayer requests had been to influence an influencer. “If we get one man who has great influence, he will have the stock to reach others.”

Jim spoke during the main sessions of each conference, while others from the team guided breakout groups. They addressed practical topics such as being a man of faith and how to be a good husband and father. They also led games, modeled after the competition modules found in Fight Club, the men’s discipleship program that was developed at the Goshen church.

One participant told Jim, “I’ve never had anyone speak to my masculinity, what it means to be a man.”

The Goshen group also found an answer to their prayer. Participating in the conferences were middle-class men who were determined to start over after being forced to flee from their homes in nearby Mosul because of their faith in Jesus Christ.

They hope to bring a Fight Club in the area. “Men are men everywhere,” he said. “The same things that we struggle with in America, the men in Iraq struggle with,” noting that the principles taught in the program transcend cultures.

They returned to the church in Erbil led by Pastor Malath, whom they had partnered with to provide apartments for those who had been forced from their homes in Mosul as ISIS cast a wide swath through the region. (Often people were forced to deny their faith in Christ or die.)

“This church in Erbil will become the hope of Erbil,” he stressed, noting that the congregation has grown three-fold since the Goshen group first visited, with 75 percent of the growth because of refugees. “It’s becoming a thriving community,” added Jim. “[Pastor Malath is] a fearless man. He’s educated and feels like God has called him there to serve.”

Jim tells of meeting a young woman who had been living in a tent in Erbil. The local congregation, using funds donated by the Goshen church, invited her to live in one of the apartments.

She told the Goshen team that the church stepped in and helped her when her family and others wouldn’t. “These dear people saw my need. Why would I ever leave this church when the light of Christ is here?”

When the Goshen group went to Iraq in 2014, motivated by a passage in 1 John that urges Christians to help brothers in need, not many civilian groups had traveled to Iraq to provide assistance. On this trip, Jim met a representative of another ministry who, 15 months ago, had followed the Goshen team into the region.

The man told Jim that his organization knew they needed to do something, saw what the Goshen team had done in providing short-term apartments for refugees, and decided to duplicate it. Other ministries also patterned their rescue work after the foundation laid by the Goshen group, according to Jim.

This trip found also the group delivering heaters to homes in the mountains of Kurdistan, taking prayer walks in the city, participating in Bible studies in the refugee apartment complex, and visiting church services.

At every turn they heard amazing stories of how people left everything because they would not deny Christ.

How have things changed in the months since the Goshen team first visited?

Jim says that the people who were in apartments have moved into their own homes, often closer to the church, and starting businesses. “I see more of the people relying on Christ and the local church than I’ve ever seen,” he adds, noting that the church is helping many of the people who are walking through hardship.

“Once it was a mission point. Now it’s a relationship,” says Jim. “Our desire is to have ongoing support, to be a sister church to them.”

Below is a video report of the team’s trip.