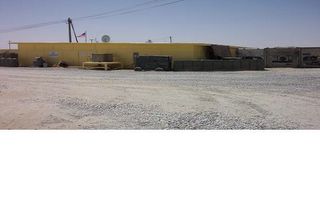 Grace Brethren Chaplain James Schaefer, serving with his troops in Afghanistan, sent this message from one of his troops, Edward Leyshon, explaining the naming of the PFC Jerrod Dennis Combat Hospital, in Kandahar, Afghanistan. Here is a slightly-edited version of soldier Leyshon’s explanation. (photo courtesy James Schaefer)

On April 25, 2003 there was a major firefight in Shkin, Afghanistan. A soldier by the name of PFC Jerrod Dennis was killed there in this firefight. I arrived there in his last moments of his life, talking to him asking him if he had a firm belief in God. His answer was yes he did.

I prayed for him that day and within minutes his precious life was taken from this earth. I never had too much belief in Christ but I have a strong belief that Jerrod is now in heaven with him. I found relief from daily stress and things going on around me by talking to my fellow soldiers and talking with the Chaplain [James Schaefer]. He has convinced me that God will turn my life around and will make the pain go away.

I guess we all have events in life that affect us and change us in some ways. This is my story. Thank you for your time.