How Dr. Cardoza’s Surprising Heritage Led Him to be a Seminary Dean 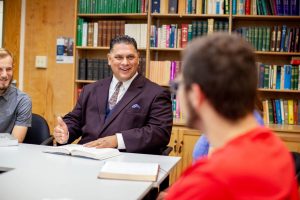 During his earliest days, Cardoza was raised by a single mother in a home with no indoor plumbing. He grew up rooted in the remote Appalachian hills of Eastern Tennessee — the grandson of a Portuguese immigrant.

Cardoza and his twin brother Teddy were the only minorities within three counties. “We got beat downs and jumped constantly. Picture ‘The Dukes of Hazzard,’ and you’ll get the idea,” Cardoza explains.

But even in the middle of nowhere, with nothing to his name, 13-year-old Cardoza was never outside the gaze of Jesus. He was invited to hear NFL football star Reggie White, who at the time was playing for the University of Tennessee, share the Gospel. Jesus saved Cardoza on the spot. By the time he was 16, he knew God was calling him into ministry.

“My life is a case study on existential meaning,” observes Cardoza. “When you have tragedy and pain and struggles and obstacles in your life, you look for an anchor. I was looking for something that matters and something that was real.” He would have never dreamed that he would become dean of a midwestern seminary at that point in his life.

Now, with two graduate degrees, more than 26 countries stamped in his passport and 20 years of experience in churches and higher education, Cardoza isn’t trying to compensate for his past. Rather, he says, “Out of the health and wholeness and happiness and holiness that Jesus has given me, I want my life to be an offering to the Lord.”

When Cardoza celebrated his 25th wedding anniversary with his wife, Kristin, in the summer of 2018, it was a watershed moment for him. “My mom divorced twice. I couldn’t even conceptualize what a healthy family was,” confesses Cardoza. Reaching 25 years of marriage was not only proof of God’s undeserved, lavish blessing on his life but that nothing is too hard for God. “God’s grace can redeem any dysfunction and uncertainty and spoil,” he says.

Besides breaking the cycles of poverty and divorce, Cardoza was the first in his family and extended family to graduate from college. After earning his bachelor’s degree in ministry from Liberty University and his master’s degree from Southeastern Baptist Theological Seminary, he began teaching part time at a college and working at a church. God moved him and his family to multiple churches situated in rural, suburban and urban environments in eight different states where he served in a variety of roles including ministry leader, equipper and consultant. Simultaneously, Cardoza taught at regional higher learning institutions, including John Brown University (Siloam Springs, Arkansas), the former Chicago Extension of Southern Seminary and Midwestern Seminary (Kansas City, Missouri).

While honing his ministry and teaching skills, Cardoza earned his doctorate from Southern Baptist Theological Seminary, and for the past 10 years, Cardoza served in the Office of the Provost and as chair of the Christian Education programs at Talbot School of Theology of Biola University. Concurrently, he served as executive director of the Society of Professors in Christian Education, an academic society serving ministry professors in 150 colleges and seminaries.

In the midst of his successful career, where he was also investing heavily in Saddleback Church (Irvine South Campus), God clearly called him from sunny Southern California to a midwestern seminary in, well, sometimes less sunny, Northern Indiana. When Cardoza fielded the call from Grace to consider applying for the dean of seminary position, he felt an overwhelming sense of peace and certainty. Grace’s biblical fidelity and its roots in Pietism coupled with its innovative spirit and strong team made Grace a compelling opportunity. “The character of the people at Grace is so genuinely holy, and that is not a word I use lightly,” he remarks.

Cardoza was most excited by the ways Grace has invested in new, effective methods to deliver theological training to ministry leaders. Grace’s Deploy program brings Grace Theological Seminary to churches, and it’s the only one of its kind — not just of seminaries in Indiana, but in the U.S. — that has The Association of Theological Schools (ATS) accreditation and Higher Learning Commission (HLC) accreditation. “If you’re a church doing great things, it is possible to host Grace in your spiritual community,” says Cardoza, “and instead of sending your team to us for training, we’ll come to you.”

“The DNA of your church that has made you so successful — your philosophies, relationships, ways of doing ministry, that whole collective trust — remains intact,” adds Cardoza. Not only do participants enrolled in Deploy get personal academic, spiritual and ministry mentors, but they also move through the degree program only as they successfully demonstrate competencies in each required area. That means churches are guaranteed that their leaders are in fact competent. “It’s truly unique and innovative,” says Cardoza. “I tell you that because I’ve been to institutions everywhere — and this program is one of a kind.”

After two years serving as dean of the midwestern seminary, Cardoza is working to expand Grace’s reach by becoming a primary training hub for the most influential church leaders in the nation. “We want to partner with churches to provide their people with the training they need. So many churches are getting their staff from the corporate world because seminaries aren’t producing the type of leaders they need.”

As a result, Grace recently announced its intention to establish the Charis Collective (CC) for Thriving Leaders with the $1 million grant from Lilly Endowment Inc. The CC will facilitate mentor-based cohorts, annual events, ongoing training events and academic programs geared toward pastors. It’s Cardoza’s vision that leaders from the CC will participate on an advisory board for the center and lend their expertise as cohort mentors, speakers and contributors. As a result, church planters, small church revitalization pastors and pastors-in-training will develop skills, competencies and relationships that will equip them for thriving in ministry.

Even as the midwestern seminary varies its educational delivery methods, including residential and online options, accelerated programs and Deploy, Cardoza says, “Biblically, we haven’t budged an inch.” Those deep roots and bedrock-firm foundation allow Grace to explore and expand with confidence.

“It’s all theological education,” explains Cardoza, “but different delivery systems for every student who has different needs and circumstances.” It’s not unlike how God met the needs and circumstances of a young boy growing up in Appalachia. “For he will be like a tree planted by the rivers of water, which will yield its fruit in season; his leaf shall not wither, and whatever he does shall prosper.” (Psalm 1:3) As Cardoza knows, it all comes down to roots and the rocks we cling to. *As featured in Grace Story Magazine, from seminary.grace.edu