“I Just Want to Find My People!” 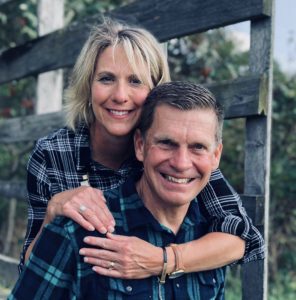 Putting together a commemorative scrapbook might not seem a likely way to be launched into a new ministry focus, but that’s exactly what happened for Anne Brown. Anne has ministered with her pastor husband, Jim, at Grace Community Church in Goshen, Ind., for almost 23 years. The church has grown from a congregation of about 65 to current attendance of about 2,500. They’ve been through three building projects and seen amazing answers to prayer and life transformation over the years.

In 2016 the 20th Anniversary of their ministry in Goshen was approaching, and Anne began to dig through the photos and mementos she had stuck in a box through the fast-paced 20 years of ministry race they’d been running. She intended to surprise Jim with an album. While the mementos reminded her of many joyous times and amazing things God had done over the years, she was not prepared for the hurt and grief they also began to stir in her heart as she sorted through them. She was reminded of people that used to be in the picture who were no longer around, of weddings performed in the church where the couples were no longer together, and other feelings of loss they experienced in their effort to minister to people.

“I wanted to be in celebration mode but instead I found myself at a low point that was like none other I had experienced before,” Anne shares. “I realized I had some hurt to process and that I was grieving. It was a new revelation to me. I didn’t know you could grieve if people didn’t die. I knew God could bring me through this, but I honestly had no idea how at the time. I was open with Jim, but I didn’t know where else to turn to work through what was troubling my heart. I don’t think I’m the only pastor’s wife that has learned to be guarded in what I share and with whom.”

By God’s grace, another pastor’s wife she’d started a friendship with at national conference ended up traveling part way so she and Anne could meet. They spent the whole day talking and sharing. It was a big step towards healing for Anne. This pastor’s wife understood and had similar experiences of her own. Along that part of her journey, Anne started to realize, “God really cares about my heart and not just my obedience. He cares that my heart was hurting. Whenever I talk with pastors’ wives, I hear similar themes and concerns. Wouldn’t it be great if we could connect and share with each other? I just want to find my people!”

Anne has been passionate about serving God since she became a believer as a freshman at Michigan State University. Sensing that she needed to discover what God wanted her to study, she took a year off and served in Mexico City as a teacher for missionary kids. But it was when she was reading God’s Smuggler by Brother Andrew that she felt a definite call to ministry.

While she wasn’t sure what that might look like, she thought it might involve using her organizational skills. She could see herself being a missionary or a pastor’s wife. She then looked for a Christian college where she could study the Bible more intensely and ended up at Grace College. There she met Jim, and they eventually began to date.

Since their marriage, she has been committed to helping Jim in his ministry as an effective pastor. Now with their youngest child off to college and the other two living on their own, Anne finds God opening doors in some new and varied areas of interest, including feeling compelled to minister to the women who stand by the pastor in the front lines of ministry. Processing hurt and grief is only the tip of the iceberg of common challenges these women often have.

“A pastor’s wife can find herself sharing her husband’s attention with hundreds of people. Her husband’s passion for the church can sometimes make it feel like another woman is in his life,” she observes. “The wife gives up a lot of her own desires and goals to make it possible for her husband to be available to serve the people of the church and beyond. Being flexible is key and may mean she needs to say “no” to church ministry/leadership positions that would fit her well, because her husband can’t be flexible around her schedule – she needs to be able to flex around his.”

Dealing with criticism of her husband’s ministry and leadership is another area that can be challenging for a pastor’s wife. Figuring out what the healthy amount of church involvement looks like can also be complicated for the wife. What is too much? What is not enough? How do we protect family time while being flexible and sensitive to church emergencies? And how do we handle not being able to say “yes” to all the invitations we’d like to accept and the expectations we’d like to meet? Saying “no” can be hard.

“I love being married to my husband and being with him in local church ministry,” Anne emphasizes. “I can’t imagine anything more rewarding or that would bring greater joy than the path God has had us on. I just want to share some of the stuff that has kept me awake at night in hopes that I can encourage other like-minded pastors’ wives. I am hoping that my candor can open up needed talk that would be beneficial to the hearts of pastors’ wives in the Charis Fellowship.”

Anne wants to be part of finding a way for pastors’ wives to connect with other like-minded pastors’ wives who hold their call as a privilege and want to be found faithful. We are better together. It’s more fun to celebrate the wins together and to help each other through what feel like losses.

You may find yourself echoing Anne’s desire, “I just want to find my people!” She would like to develop a network for pastors’ wives, a safe place where they can be real with one another and also sharpen and encourage each other. If you are a pastor’s wife in the Charis Fellowship and would like to be a part of developing this network email Anne at abrownster@yahoo.com. Or if you just want to email to say you would be interested in being part of such a group, email Anne to let her know.

Please join Women of Grace USA in partnering with and praying for this network. We are thankful God has laid this ministry on Anne’s heart for such a time as this. — by Viki Rife with Anne Brown, wgusa.org