I Was a Stranger and You Took Me In 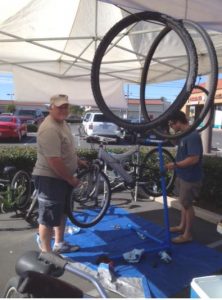 Grace Church of Orange (Mike Sciarra, pastor), sponsors a bike repair ministry in the Hispanic neighborhood near the church.

Soheil had finally arrived at LAX. After fleeing Iran because of political persecution and spending two and a half years in Turkey waiting for his refugee status to the United States to be approved, the 24-year-old was ready to launch his new life in the United States of America.

But his U.S. contact who was supposed to meet him at the Los Angeles airport didn’t show. He had cleared immigration and met with the representative from the IOM (International Organization for Migration) for a welcome and brief orientation. Now he was sitting alone in an airport where he knew no one and was not comfortable with his ability to speak the language. What should have been the best day of his life had become the worst. Not knowing where to go or what to do, he pondered whether to get on a plane and return to Turkey. Fortunately, an IOM representative spotted him sitting alone and helped him get connected with the local World Relief office.

The next day, I met Soheil through my volunteer work with World Relief. Over the coming months, I walked with him through his journey to get acclimated to his new country.

His first job was as a part-time janitor at Grace Church of Orange. For a while, he held down multiple part-time jobs simultaneously to make ends meet. Now he has a good job as a limousine driver and pursues his passion for photography on the side. As his fifth year in the U.S. approaches, he’s excited to begin the process of applying for U.S. citizenship.

Engaging with people who are culturally different than us can be difficult. It forces us outside of our comfort zone: Struggling to understand and be understood; unintentionally insulting and being insulted; each of us having expectations that we take for granted but the other doesn’t. Dozens of Scripture passages—from the warning of judgment on “those who turn aside the alien” in Malachi 3 to Jesus’ words in Matthew 25 about caring for him when we care for strangers—make it clear that God expects us to do exactly that.

According to a Lifeway Research study in 2015[1], only 12 percent of evangelicals say the Bible is the primary influence of their view on immigration. Perhaps that’s because only 21 percent have been encouraged by their church to reach out to immigrants in their community. Another study[2] shows that 34 percent of Americans believe that immigrants negatively impact American culture. But among white evangelical Protestants, those holding a negative view increases to 53 percent, even while 73 percent say that the arrival of immigrants “presents a great opportunity to share Jesus Christ and make disciples of all nations within our own communities.”[3] Why do Christians hold such a negative view in the face of such an excellent opportunity to fulfill the Great Commission[4] to make disciples and the Great Commandment[5] to love others?

Once convinced that it would please God for us to engage with those He moves within our borders, how do we go about that? Here are some of the practical ways churches, individuals, or families can demonstrate God’s love for immigrants:

We take these for granted, but they might be new to them depending on where they’re from. The best way to recognize these needs is to just spend time with them. Every-thing in this list is from my personal experiences with immigrants.

While 42 of the 400 wealthiest people in America are immigrants[6] and in 2016 about 10,000 millionaires moved to the US[7], the majority of immigrants are in the lower economic strata, especially during their first years getting settled in the US. Some of the ways we can help include:

This is one of the most popular ways churches engage with immigrants. Whether in classroom settings or informal discussion groups (including Bible studies), improving their English is vital to most immigrants. Your local college may be an excellent place to engage international students in this way. 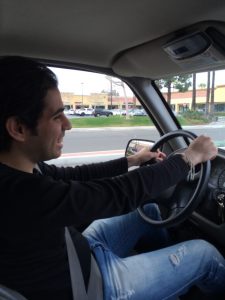 Soheil driving for the first time driving with his new license.

Their Number One Need: Friendship!

In addition to engaging in the opportunities above, churches can also equip their people to engage well with immigrants by:

Less than two months after Soheil’s arrival, the Orange County Register wanted to do a story on a refugee’s first Christmas. So our family was hosting not only our first refugee, but our first newspaper reporter and photographer as well. The reporter asked Soheil about his favorite memory since coming to the US. His answer: helping me put up the Christmas lights on the front of our house. Want to know how to help an immigrant? Let them help you. It’s hard to always be on the receiving end. Being useful increases dignity.

I get choked up as I remember the 52-year-old Sudanese man who broke down crying as he climbed out from behind the wheel of my car and stared at the paper in his hand. It said that he’d just passed his driver’s license test. The first driver’s license in his life. I had spent many nerve-wracking hours letting him practice in my car. Driving is an important skill when you live in Orange County, Calif. I’ve helped at least six immigrants (including Soheil) get their licenses. (Warning: This one takes nerves of steel and a car with an emergency brake you can reach from the passenger seat!) So how do you help an immigrant? You help them accomplish their dreams and ambitions.

Demonstrating Christ’s love to immigrants is guaranteed to write stories into your life about joys and successes, about being used by God, and about challenges, heart-aches, and frustrations. But all of those stories are about God’s transformative work in their lives and in yours.

Helping immigrants isn’t about “what’s in it for me,” it’s about “what’s in me for them.” I have a Savior who made the greatest sacrifice in human history because He loves me. And there are more than seven billion other people in the world today that He loves just as much.

With His love in me, I have to ask myself what is in my life that I’m not willing to sacrifice — to put at risk — to demonstrate Christ’s love to those in need. I don’t have a choice about whether to do it; I can only choose how to do it. Want to help an immigrant? Be the love of Jesus to them.

Alan Weisenberger is an elder at Grace Church of Orange in Orange, Calif. and serves on the board of Encompass World Partners. He also volunteers with several other organizations serving refugees, the homeless, and disaster survivors.