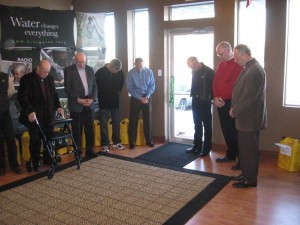 With a ribbon-cutting and a prayer, Integrated Community Development International (ICDI) on Sunday afternoon, February 13, dedicated its new worldwide ministry headquarters on State Route 15 just north of the US 30 interchange in Warsaw, Indiana.

ICDI was founded in 2004 by veteran African missionaries Jim and Faye Hocking with the help of many friends, supporters, and colleagues. The vision of ICDI is to eradicate the trend of persistent poverty in central Africa through collaborative efforts at the village level.

Rondeau paid tribute to a number of local organizations and individuals who have contributed to the growth and development of ICDI, including Silveus Insurance, who initially assisted ICDI with office space, and the Grace Brethren Investment Foundation of Winona Lake, which is helping to finance the new facility.

ICDI is a non-denominational, non-governmental, and non-profit faith-based organization presently working in the Central African Republic and other surrounding countries. ICDI has 501c3 status in the USA as well as tax-exempt NGO status in the Central African Republic. Several years ago ICDI was approved by the Fellowship Council of the FGBC as a cooperating ministry.

It currently operates out of three primary locations in the Central African Republic, although the international headquarters are in Warsaw, Indiana. The capital city of Bangui is the headquarters for ICDI administrative staff, as well as the primary orphan care center, and the primary AIDS/HIV training headquarters.

Just north of Bangui, ICDI’s short-wave radio station transmits from the town of Boali. In western C.A.R., Berberati is the primary center for the well-drilling and well-repair crews, with storage facilities for supplies and a full garage capable of complete vehicle rebuilds and pump repairs. This past December, ICDI’s well drilling work was featured in an ABC News special with Diane Sawyer and Chris Cuomo.

Found Jim Hocking says, “We have seen God work in awesome ways through the Central Africans working with ICDI and hope to empower even more nationals. Conflict continues in the country, limiting access to some areas of the country for expatriates, so training Central Africans is a key part of ICDI’s strategy.”