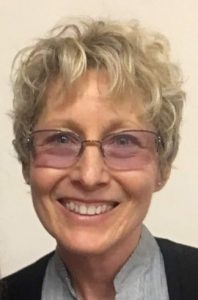 After an accident that should have taken her life, Sherry Martin (in photo at right) had to answer one question for herself: how was God going to use it for His glory?

She and her husband, Jeff Martin, associate pastor at Delaware Grace, a Charis Fellowship congregation in Delaware, Ohio (Dave Pacheco, lead pastor), were hit by a distracted driver on March 14, 2014. The accident seriously injured Sherry’s brain.

Sherry says, “During the 20-minute ride to the hospital, the Lord reminded me to be intentional and that He has a bigger plan.”

Through 10 months of not being able to attend church and two years of recovery, Sherry had to remind herself of the words hidden in her heart. Scripture became her stronghold. She thought, “I can still share the gospel with an injured brain. Praise God.”

Many of Sherry’s systems were injured, such as her vision and balance. Another trauma from her brain injury was the loss of the area that could differentiate voices in noisy areas.

“Even though I have above average hearing for my age,” says Sherry, “I later found out I had profound hearing loss due to a complex concussion.”

She shares, “I prayed, ‘Lord, on March 14 You put Your hand between me and death. You had planned to use my clay vessel in a different way. What is it?’”

Sherry is not alone – one in six Americans suffer from some form of hearing loss. Through her injury, she became aware of a technology called looping, that would help hearing impaired individuals better engage with a church’s worship service.

“Hearing loops are listening systems that send audio signals from an amplifier through a wire that is installed in a specific area,” says Mark Valatka, business development manager of GET LOOPED, who had a display at Access2018. “When a person wearing tele-coil-equipped hearing aids puts their aids in a tele-coil position, the hearing aids can receive the high-quality sound directly into their hearing devices.”

At Delaware Grace, the church’s auditorium is now fully looped. The technology costs less than a set of hearing aids, and it eliminates echo and nearly all background noise, allowing someone like Sherry, who has trouble differentiating sounds, to hear clearly.

Sherry says that the importance of this in churches is massive, as a lack of clarity during teaching can cause miscommunications and frustration for the listener.

“You cannot process correctly what you have not heard correctly to begin with,” says Debra Valatka, director of GET LOOPED and CEO of Hearing Loops, the technology manufacturer.

It’s the difference between louder and clearer, and with the gospel, clear is necessary.

Sherry says, “We are advocates for a population that is being called to worship but whose hearing is isolating them. I’ve been there and now I am their voice. I’ve been educated, healed, and now I’m thrilled. God does not waste pain.”

[Connect:] To send a note of encouragement to Sherry, click here. To find out more about having your church looped, click here.