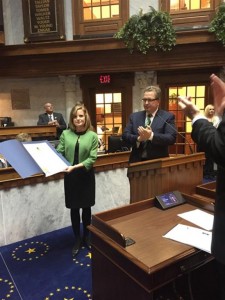 Amanda Banks, director of public relations at Grace College, was honored by the Indiana Senate on Tuesday with the Sagamore of the Wabash Award.

The Indiana State Senate has honored Amanda Banks with the Sagamore of the Wabash for serving as State Senator of District 17 during the 2015 legislative session.

Banks was recognized for her willingness to fill her husband’s seat while he was deployed to Afghanistan. During her time at the Statehouse, Banks championed legislation aimed at reducing Indiana’s veteran unemployment rate by allowing private sector employers to adopt a veteran hiring preference.
State Sen. Brandt Hershman (R-Buck Creek) presented the Sagamore to Banks at the Statehouse where lawmakers gathered for Organization Day.
“Amanda’s readiness to serve the residents of Senate District 17 did not go unnoticed,” Hershman said. “She sacrificed time away from her young family and stepped into a new role in order to represent her fellow Hoosiers. She is also responsible for legislation that will help employ Indiana’s veterans, and for all this we are extremely grateful.”
“It was an honor to serve my community and my state in this capacity,” Banks said. “With the help of my colleagues in the General Assembly, I was able to work on veteran, education and pro-life issues – three areas of public policy I am very passionate about. I am extremely humbled by this award and am thankful to my colleagues for their support through my time as a state senator.”
Following the 2015 legislative session, Banks accepted a position with Grace College as their Director of Public Relations.
“Amanda served the Senate with passion and integrity,” said Senate President Pro Tem David Long (R-Fort Wayne). “She brought her unique experiences and perspectives as a policy analyst, military wife, and mother to the Statehouse, and we are thankful for her service to the state. Amanda is deserving of this prestigious award and we wish her the best.”
Dating back to the 1940s, the Sagamore of the Wabash Award was created by former Gov. Ralph Gates. It is the highest honor the governor can bestow, and is only presented to distinguished Hoosiers who have made significant contributions to the state.
Social Share