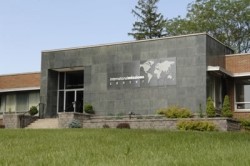 The announcement said, “The sale of the International Missions Center forms part of a strategic plan to underwrite the ongoing costs of relocating the mission headquarters to the ethnically diverse region of Northeast Atlanta.

“To create space for staff remaining in Winona Lake, Encompass will convert the former Missionary Residence into a multi-use facility of offices, rental apartments and missionary housing.”

Encompass World Partners’ new offices in Atlanta and Winona Lake are scheduled to open by September 1, 2012

Leave a Reply to Kent and Becky Good Cancel reply