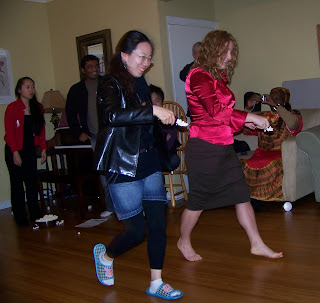 For the third consecutive year, the Grace Brethren Church in Tracy, Calif. hosted a Thanksgiving meal for international students in San Francisco. It was held at the International House of Friendship, where Kevin and Sieu Choo Ong minister to young men and women from around the world.

This year, more than 70 students and ministry supporters attended the November 17 dinner. About 20 members of the Tracy church prepared the meal, while another 10 took it to the city and served it, relieving the Ongs from any preparation or cleanup.

“After the meal, we led in games and a program in which a Christian perspective of an American Thanksgiving was presented,” reported Robert MacMillan, Jr., teaching pastor at the Tracy church. Guests were challenged to consider most world religions and to test the truths about Christianity.

In the photo above, two students (from different continents) participate in the popcorn race.