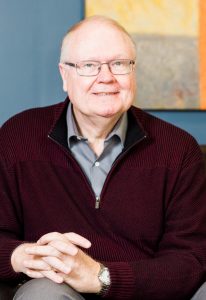 It was the mid-1990s, and Ken Seyfert had a successful career as an investment banker in Harrisburg, Pa. A morning prayer breakfast where he met Ed Lewis, the director of CE National, changed all that.

“Ed was sitting at my table,” Ken recalls of the event at the Grace Brethren Church in Myerstown, Pa. The two struck up a conversation and eventually agreed to become long-distance prayer partners.

“We decided to call each other once a month,” he remembers. “It was an accountability-type of prayer partnership.” Over the next few years, the two would talk regularly. Ed began to encourage Ken to do more than work in the secular world. “He would say, ‘You really ought to consider doing something more full-time for the Lord,’” Ken says. “He felt I had a lot of gifts. He kept praying and talking.”

Ken and his wife, Donna, admittedly, had some trepidation about moving their family from Pennsylvania to Indiana. But when Jim Johnson retired as director of the Grace Brethren Investment Foundation (GBIF) in 1997, doors opened for Ken to step into that position.

In May, he will retire after 23 years serving the Charis Fellowship through the Foundation.

He was drawn to the position because it required someone with investment and lending experience. (The Foundation, a church-extension fund, serves as a savings and loan for churches and organizations within the Charis Fellowship.)

“When I put a resume together, I could see pretty clearly. It seemed I was sort of in training for all this because they needed somebody with experience in both areas,” he reminisces. In 1997, he was named managing director, overseeing the day-to-day operations of the organization. With the retirement of Larry Chamberlain in 2013, he was named chief executive officer.

“Under Ken’s leadership, GBIF has experienced significant growth and has consistently been the lender of choice to churches and organizations in our Fellowship,” says Jim Augspuger, executive pastor, Grace Polaris Church, Westerville, Ohio, and a member of the board since 2010. “Ken has diligently navigated GBIF through much market volatility, to deliver a fair loan rate to borrowers, ensuring a good rate of return to our depositors, and through the annual goodwill contributions furthered the church planting and leadership development work of our Fellowship. Ken is a talented leader who consistently delivers strong results while effectively stewarding the assets under his management.”

Ken is more unassuming about his role at the Foundation. Ask him about what has changed over the years, he’ll modestly talk about the Charis Fellowship – expansion within the network of churches, young pastors with a passion for Christ, and the increase of multi-campus sites. The Foundation has had a part – providing funding for much of that growth, but the reality is that some of the progress has been fueled by Ken’s God-given ability to shepherd investments successfully.

“In general, you can say that the arrows moved in the right direction under his leadership, and in many cases, they moved significantly,” says Ryan Bowell, vice president and director of credit services at the Foundation.

In the past 23 years, the Foundation has increased in total assets from $42.8 million to $112.1 million, or 162 percent. The dollars invested has increased by 155 percent, from $38.9 million to $99.2 million, resulting in more than $55 million in interest paid on customer investment accounts. Nearly 200 loans have been made to Charis Fellowship churches and ministries, totaling approximately $150 million.

“It’s all the Lord’s work,” stresses Ken, “He gets the glory for it all.” He credits local pastors who he says are “guys of integrity but also have been given the vision to believe the Lord for great things, and unafraid, believing Him to take a risk. And we, along with them, have had to trust their visions and believe that God is in these works,” he adds.

Several years ago, the Foundation came through a recession in the U.S. without a dip in investments, a tribute to conservative investment philosophies.

“There’s a lot of risk with church building projects,” he admits. As a result, the loans toward those projects have been structured requiring a lot of equity. “We encourage raising as much cash [as possible], just pure cash or pledges, in capital campaigns,” he adds.

“I think that’s how we avoided more trouble because we did keep our standards,” he stresses. Many times, the Foundation has required 30 to 50 percent in equity, either cash or capital campaigns, or a combination of the two, along with strong balance sheets and giving of churches.

“We stayed away from speculative investments,” he notes. “We’ve always operated that way very conservatively, too, avoiding losses.” He quotes Warren Buffett, the CEO of Berkshire Hathaway, who is known for his fruitful stock picks. “‘Rule No. 1: Never lose money. Rule No. 2: Never forget rule No. 1.’”

Ken also says that advances in technology in the banking industry have allowed the Foundation to expand services, build on its solid history in the Fellowship, and yet not add staff.

“I hear some of the old stories, decades before me even, where you needed an employee to write all these numbers in ledgers,” he says. “We don’t do that any longer. The computers take care of it. The whole software system we have has made it not necessary to hire more people, and [we] rely more on technology.”

While staff numbers at the Foundation have not grown over the last 23 years, it is notable that staff turnover during that time has been low. Four staff members have served 34, 27, 21, and 19 years respectively, with the remaining two with seven years or less in tenure.

“It’s a team, and everybody knows their roles,” says Ken. “Everybody, I think, feels appreciated, and they’re all on mission together.” He feels that a focus on others, especially the investors and the borrowers, has made the difference.

One hallmark of the Seyfert years has been the increase in goodwill giving to ministries within the Charis Fellowship. “[The board] made a decision more than 20 years ago, together with the executive staff, that we wanted to be a part of helping other ministries in the Fellowship,” says Ken. Initially, the decision was to give away up to 50 percent of Foundation earnings.

“The dollars increased over the years because the amount of our income increased substantially,” adds Ken. “We started increasing even above 50 percent at times. We’ve done that to bless the Fellowship, to help with the church-planting efforts, leadership development, and the cooperating ministries and integrated ministries that are part of the Fellowship.”

Those who have worked with him will emphasize that Ken has served the Grace Brethren Foundation, Charis Fellowship churches and organizations, and people in a way that reflects the love of Jesus.

“As past chairman of the board, I have especially enjoyed working with Ken at a more personal level,” adds Augspurger, who just completed a four-year term as chair. “He truly loves working with churches to provide funding for the many projects over the years. He has a concern to help these churches to accomplish the great commission. He loves the Lord Jesus, and that shows in his partnership with churches and organizations in the Fellowship.” 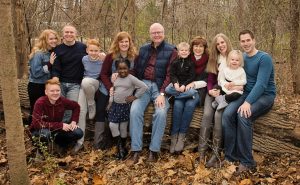 When Ken steps down at the end of May, he won’t be completely leaving involvement in the Charis Fellowship. “I’m still planning to serve the Fellowship part-time,” he says. He’ll continue to oversee the Retirement Investment Plan for the Fellowship, a role he has held since 1997. The Retirement Investment Plan serves the pastors and staff of Charis Fellowship churches and organizations with retirement savings options. As of December 31, 2019, 377 participants were registered in the plan with a combined asset value of $9,963,889.

He also looks forward to volunteering in other areas, particularly at Winona Lake Grace Brethren Church (Bruce Barlow, lead pastor), where they have been active members.

High on the list of activities is spending time with he and Donna’s family, who are all within easy driving distance of their home in Warsaw, Ind.

Their daughter, Tara, is married to Jon Rauch, who serves on staff at Grace Community Church, Goshen, Ind. They live in Goshen with their four children.

Son Troy, his wife, Kristin, and their two children, live in Lansing, Mich.

“It’s been the best 23 years of my life,” ponders Ken. “I’m grateful that the doors opened up, that I could be of service, and all the great people, leaders, pastors that I’ve been able to connect with. It’s just been the most fulfilling part of my life.”

This story first appeared in the Spring 2020 issue of GraceConnect magazine. Click here for your complimentary subscription to this quarterly publication.