Is Friday the 13th Bad Luck? 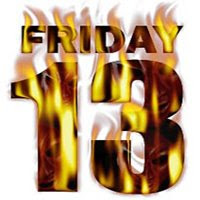 The fear of Friday the 13th is called paraskavedekatriaphobia , a word derived from the concatenation of the Greek words Paraskeví (Παρασκευή) (meaning Friday), and dekatreís (δεκατρείς) (meaning thirteen), attached to phobía (φοβία) (meaning fear). The term is a specialized form of triskaidekaphobia, a simple phobia (fear) of the number thirteen appearing in any case.

According to the Stress Management Center and Phobia Institute in Asheville, North Carolina, an estimated 17 to 21 million people in the United States are affected by a fear of this day.

Some people are so paralyzed by fear that they avoid their normal routines in doing business, taking flights or even getting out of bed. It’s been estimated that [US]$800 or $900 million is lost in business on this day.

Despite this, representatives for both Delta and Continental Airlines say that their airlines don’t suffer from any noticeable drop in travel on those Fridays.

A British Medical Journal study has shown that there is a significant increase in traffic-related accidents on Fridays the 13th.

But you know. . . if your confidence is in the Lord, all this really doesn’t matter, does it? “Bad luck” is, first and foremost, bad theology!