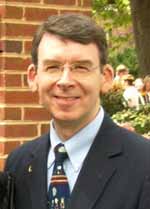 Christian Becker (pictured), pastor of the First Brethren Church of Buena Vista, Virginia, recently sparked interest with a Christian worldview article in his local newspaper. Reproduced here is the article from the Rockbridge Weekly.

Last week I got a call from a Fox Radio program to see if I would be a guest on a late night program. They wanted someone who advocated burning Harry Potter books.

With all the publicity about J. K. Rowling’s latest book release, I guess they were looking for an extreme right-wing “wacko” preacher as a contrast to the show’s more liberal host.

If there’s one thing that Harry Potter has done well (besides sell a gazillion books) – it’s to stir up a vigorous debate! I found that out personally while doing an interview for a local student newspaper in a Lexington coffee shop. A customer at one of the nearby tables overheard the conversation and felt like she had to let me know how much she disagreed with me.

Many parents have questions about the Harry Potter series. They hear that it’s harmless and then they read that it might be getting their children into witchcraft. An article in the July 10, 2001 Orlando Sentinel reported, “The Harry Potter movie accurately portrays Witchcraft.”

Let’s face it. Children love to imitate grownups, movie stars and sports heroes. I can remember reading Science Fiction as a student and wondering if telekinesis and teleportation might actually work. So I tried to mimic what I had read. (I never did get anything to move by the power of thought…)

Children ARE easily influenced and haven’t yet learned critical thinking skills. They DO learn from what they read and see and often imitate it. (If that’s not true, then why do we send them to school?)

So–what about the title of this article? Is Harry Potter queer?

Michael Bronski wrote an article two years ago called, “There’s Something About Harry.” In it he wrote, “The Harry Potter books are, in a word, queer. As used today, “queer” means “homosexual,” but it has larger connotations too. The word also suggests a more generally deviant, nonconformist, renegade identity. In its oldest, original sense, queer means “deviating from the expected or normal; strange” or “odd or unconventional in behavior.”

Bronski concludes, “The Christian Right just might be—at least partly—right. The Harry Potter books are a threat to normally accepted ideas about the social welfare and good mental health of American children. Not because they romanticize witchcraft and wizardry, but because they are subversive in their unremitting attacks on the received wisdom that being “normal” is good, reasonable, and even healthy” [June 27, 2003, The Phoenix.com web site.]

In the Potter series, “normal” people are belittled and ridiculed as “Muggles.” Any child reading the series could reasonably conclude that they are boring and don’t have much to offer the world unless they have some kind of special powers–like Harry.

Add to that concern the accurate portrayal of witchcraft in the movies and I’m amazed that more parents aren’t up in arms over Harry. Instead it seems that millions of them actually buy the books for their kids because “at least they’re reading.”

What’s a parent to do? Well, if your child is old enough to understand the difference between fantasy and reality (and you want them to read the book), why not read it with them and discuss its worldview, ethics and morality? Do a little research about it. A good resource is the article “Questions About Harry Potter” by Dr. John Ankerberg on the Internet at www.johnankerberg.org/hp-articles/hp-questions.htm. (I especially liked his answer to the question, “How can Harry Potter be read by students in the schools when they aren’t allowed to read the Ten Commandments?”)

If you are a Jew or a Christian, study the Bible together with your child. Look up what God says about witchcraft and sorcery and discuss it. A good place to start is Deuteronomy 18:9-13.

And as far as burning books, that’s exactly what Christians in the early church did. In the New Testament book of Acts (19:19) we read, “A number who had practiced sorcery brought their scrolls together and burned them publicly.” Apparently they took God’s prohibition seriously!

One concern I haven’t seen discussed is this: Is Harry Potter getting a generation ready for the End Times?

As a Bible-believing Christian, I take the End Times scenario in the Bible seriously. The Bible talks about an Anti-Christ and his prophet who will work signs and wonders and deceive many.

If you read about his powers in Revelation chapter 13 (bring down fire from heaven, give life to an inanimate object), another good description of this person would be a “Wizard.” And today we see one of the most popular books of all times getting kids to adore a wizard and wish they could be a one. Is it just a coincidence or might this series get a generation ready to be deceived by the greatest wizard the world has ever seen, the Anti-Christ?

Now THAT’S something to think about!