Is It the Sawdust Trail? No, It’s a Football Practice Field 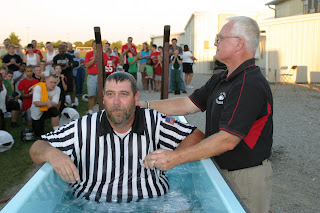 The Columbus Crusaders football team, a ministry of the Grace Brethren Church of Columbus, Ohio, finished their 2007 season in the style of the sawdust trail.

Sure, the varsity and junior varsity squads played a total of 19 games, with the varsity team seeing six wins and three loses. They played games with teams from Canada, Pennsylvania, West Virginia, and of course Ohio.

But the team also saw a season marked with a variety of faith walk commitments. Four varsity players made a decision to follow Jesus Christ and asked to be baptized in front of the Crusader family. A portable baptismal tank was set up on practice field and all four were baptized!

The story does not stop there. A coach felt he should also take that faith step, so he was baptized that afternoon!

On the sidelines was a man who had officiated at many of the Crusader games. Because of that witness, he accepted Jesus Christ as his Savior! Following a middle school game where he officiated, he requested to be baptized, striped shirt and all! So a baptismal tank was rolled onto the practice field and he was immersed in front of players, parents, and fellow officials.

Crusader Football is a ministry that involves more than 230 boys in uniform from grades 5 through 12. It represents 84 different churches and 54 schools. More than 35 volunteer coaches help lead the program.

Material from Manhood in Action is used as a framework for the teaching and guidance of young men at all levels. It teaches the traits of Commitment, Honor, Responsibility, Initiative, Service and Truth, encouraging young men to become men of CHRIST. It has become a place where Godly men make a difference – souls are saved and character is built.

(See a story about Crusader Football from the September-October 2005 issue of FGBC World here.)
In the photo above, football official Rick Radcliff is baptized by Crusader football Coach Mike Stanley.
Social Share