“It Was What Needed to Be Done” 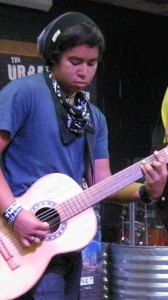 This morning we received story from the Grace Brethren Church in Norwalk, Calif., that is a behind-the-scenes look at how God used a teen from the church during a crisis at the airport. Pastor Jeff Patton tells the story:

“One of our teens was at LAX on November 1 in Terminal 3 when a gunman went on a shooting rampage. Timmy Ramirez was waiting to board his flight to Urban Hope (in Philadelphia, Pa.) for his OB (Operation Barnabas) reunion. As thousands began running and fleeing, Timmy turned to help a frightened little girl who was hiding under some seats and had been separated from her parents. He handed her off to a couple who were not her parents, and then he turned to help an elderly woman who had been knocked down and couldn’t walk. Timmy picked her up and carried her in his arms out an emergency exit and onto the tarmac to safety. Timmy missed his flight and his reunion and was stranded at the airport 12 hours before his family could retrieve him. Timmy’s testimony in danger was phenomenal and he acted heroically, and he absolutely wants no glory or attention. He said, ‘Things needed to be done and so I did what needed to be done.’ Praise God for sparing his life and for his valuable testimony.”