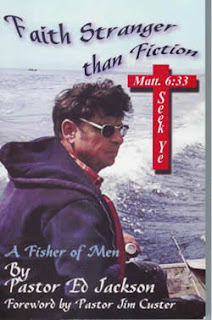 Faith Stranger Than Fiction, the book by long-time Grace Brethren pastor, Ed Jackson, has been printed a second time. First published in 2004, the book chronicles how the vision of God’s purpose for the church caused the former Ohio State Patrol trooper to abandon his plans for a career in law enforcement and become a “fisher of men” in full-time ministry.

The book includes updated information, including corroboration of a story about the “phantom” U.S.S. Scott, the ship on which Jackson served as a U.S. Marine at the end of World War II.

Proceeds from the book are used to provide additional schooling for the young men on the staff of the Powell, Ohio, Grace Brethren Church, where Jackson coordinates the missions’ ministry. The first printing generated $12,000, according to Jackson, and has paid for the seminary education of young men such as Kary Oberbrunner, who recently received a D. Min. degree in transformational leadership.

Faith Stranger Than Fiction may be ordered for a suggested donation of $10 from the Grace Brethren Church, Powell, 7600 Liberty Road, Powell, OH 43065. It also may be ordered by sending an e-mail to pollyj@core.com or grace@gbcpowell.org, (put attn. Pastor Ed Jackson in subject line).