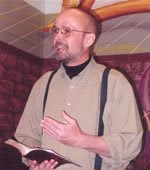 The Warsaw Times-Union and WRSW Radio have sponsored the Man of the Year Award since 1959. In order to be a recipient of the award, one must first be nominated by someone within the community and then judged on the following selection criteria:

Normally given to business men and politicians, it’s a rare honor for a chaplain to receive the award. But John’s contribution to the community through the Kosciusko County Jail Ministry has been exceptional as hundreds of letters poured in nominating him for the award.

In accepting the recognition, John gave the glory to God by saying, “14 years ago when I was incarcerated I was a thief, a drunk, and a liar… but God touched my life in jail and all the praise goes to Him.”

John’s jail ministry does come out of personal experience behind bars. In 1994, he spent time in the Kosciusko County Jail for conversion (stealing). Those first ten days in February resulted in a different kind of “conversion” that totally changed his life and his destiny. Sitting in a cold jail cell gave John time to think about his relationship with God, and prompted him to receive Christ as his Savior and Lord. John then went about making complete restoration, where possible, for any past sins.

After his release, John was burdened for men and women still behind bars. He soon began returning to the Kosciusko County Jail with the Gideons to share Christ with the inmates. In January of 1995, he became jail chaplain.

Now he leads the team that ministers in the Kosciusko County Jail. Every Sunday morning he conducts services for around 100 inmates–60 percent of the jail population.

Throughout the week, John oversees more church services at the jail and Work Release and counsels inmates. Saturday mornings he meets with his team and others for planning and prayer.

Peggy Owens, CE National staff member and Jail Ministry volunteer says about John, “I’ve never known anyone to better follow Jesus’ greatest commandments to love God with all your heart, soul, strength, and mind, and to love others as yourself.”

John’s testimony and example of a heart wholeheartedly sold out to God inspires hundreds within, and without, the walls of the local jail.

John, along with his wife Patti, are members of Community Grace Brethren Church in Warsaw, Ind.