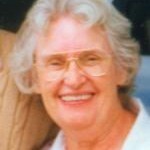 Jean (Craig) Wooler – 81, of New Holland, Penna., formerly of Fayetteville, Penna., went home to be with her Lord on Sunday, February 6, 2011, at Garden Spot Village in New Holland.

She was the loving wife for 61 years to Howard William Wooler.

She was born in Philadelphia, Penna.,  to the late David and Beatrice (Cassel) Craig.

Jean graduated from Olney High School in Philadelphia, class of 1947. She was a devoted mother and grandmother. Jean volunteered much of her time in the “Released Time” Bible class in the Fayetteville, Penna., area.

She enjoyed crocheting, traveling to Florida with her husband during the winters and spending time with her family, grandchildren and friends. Jean was in fellowship at North Ridge Bible Chapel of Sellersville, Penna.

She was preceded in death by a brother, Paul Craig.

Viewings will be held at Anders Detweiler Funeral Home & Crematory on Friday, February 11 from 6-8 p.m. and on Saturday, February 12 at North Ridge Bible Chapel from 10 to 11 a.m.