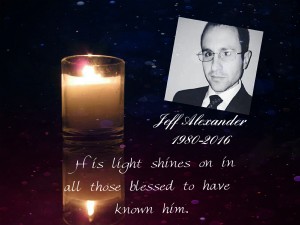 Word has been received of the death of Jeff Alexander, grandson of former Grace Brethren pastor and wife, Galen and Kathern Lingenfelter. He was badly burned when his house exploded on June 10 from a gas leak.

“For 6 weeks Jeff and his Stephanie fought for his survival. He was determined to heal. His battle ended on July 23, 2016, at 3:25 pm Mtn time. The trauma that he endured was more than what his body could handle. There were complications internally that were preventing proper circulation of blood flow which was causing internal organs to shut down/die. After 5 1/2 weeks of advocating for Jeff and giving him the chance to heal, the point came were it was out of our hands. The family came to the decision that what was best was to give Jeff back to God and remove the life support. Hours later, Jeff was reunited with his grandparents. We all deeply miss him but are thankful he is no longer suffering here. He was surrounded by family when he went to Jesus. We are grateful that we were given the chance to remind Jeff how much we loved him and how proud we are of a that he accomplished on his journey here. I am grateful that he was not alone when he cross that threshold.

“This is what our mom Charlene (Lingenfelter) Alexander shared on Facebook:
“‘Today at around 3:25 pm, mountain time, my beloved son Jeff went to be with Jesus. He was greeted in heaven by my Tom, and his Grandpa L., I’m certain. While we are devastated to lose him here, we know he is no longer in pain, and that is a great relief. Many parts of this don’t even seem real to us yet. Please continue to pray for our family as we come to terms with this. Jeff was the best of the best, and we will miss him so very much.'”

An obituary will be available later when plans for a memorial service are announced.