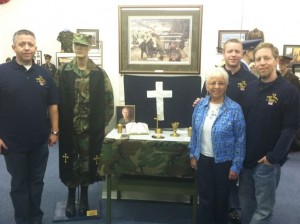 Jerry Young’s three sons, along with Loreen Young, pose with the military items donated to the museum by the Young family. Jared Young is on the left, Justin is behind his mother, and Jason is on the right.

Loreen Young, wife of the late Dr. Jerry Young, has sent along this photo and report of some friends who operate a military museum, to which the Youngs donated artifacts from Jerry Young’s military career as a chaplain.

Speaking of the museum’s founder, Loreen said, “He is a Viet Nam vet with shrapnel still in his body and he developed the most fantastic military museum in Ft. Morgan. It takes two hours to go through it, as he has traveled all over the world to collect uniforms, guns and much more to go into his museum.”

“He asked me if he could have some of Jerry’s military things for his museum so the week they left I got together some things, the first I have had the courage to part with, and gave them to him. I asked my three sons to join me last weekend in Colorado to see their dads’ things on this display and we were thrilled to see this right inside the front door.

“This is his fatigue uniform with the chaplain stole and all the things in his chaplain kit that he used in his communion services for the army guys.  I am so thrilled that it is there in display.”

The museum is located about 70 miles northeast of Denver in a small town of about 12,000 population.

Jerry Young, who died in December of 2010, was the senior pastor at Lititz (PA) Grace Brethren Church for 33 years. He also served as a chaplain in the US Army Reserves for 33 years and achieved the rank of colonel.