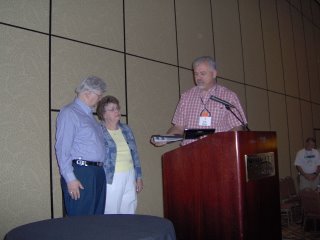 Dr. Tim Boal (right), president of the Association of Grace Brethren Ministers, presented to Jesse Deloe (left) the 2006 “Excellence in Ministry Award” from the Association of Grace Brethren Ministers in the opening session of today’s Celebrate06 meetings. Jesse’s wife, Gladys, was also present for the presentation of the award.

Since 2003 Jesse Deloe has been Director of Operations and Senior Editor at Brethren Missionary Herald Company, but his lifetime of service to the Fellowship of Grace Brethren Churches has touched nearly every church and organization in the Fellowship.

He has been pastor or interim pastor of Grace Brethren churches in Iowa, Ohio, California, and Maryland.

From 1988 until 1997 Deloe was Director of Administration for the Grace Brethren Home Missions Council (now GBNAM). He has also served as a church consultant, and has been active in his local church, the Winona Lake (IN) Grace Brethren Church in many roles.

Deloe was also moderator of the Fellowship of Grace Brethren Churches in 1979-1980. He and his wife, Gladys, have been married 50 years and they have two sons, Christopher and Jonathan, and three grandchildren.