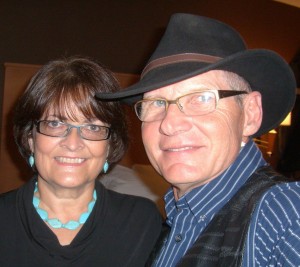 Jim Hocking, founder and CEO of Water for Good, has been granted a one-year leave of absence (sabbatical) from his operational responsibilities. The Water For Good board of directors voted unanimously to grant the sabbatical to Jim following ten years of dedicated service to the organization. Jim will continue his responsibilities as founder, sharing his vision, speaking on behalf of the organization, and meeting with partners and donors. (Jim is in the photo at right with his wife, Faye.)

Over this past decade, Jim has poured his heart and soul into the startup of what is now the largest water organization in the Central African Republic (CAR), one of Africa’s most notoriously difficult countries to work in. Jim has set aside personal, familial, and professional goals in order to serve the people of CAR, and due to his vision and drive, more than 500,000 people (10 percent of the population) have been provided with life giving water and hope for the future. In recognition of Jim’s service, and in preparation for many more years to come, this is to be a time of rest and renewal for Jim and his family.

Richard Klopp, former Water for Good Chief Operations Officer, has been appointed to replace Jim as interim CEO for the 12 months of sabbatical. Richard is well-prepared for the task, having served as CEO in three previous international nonprofit organizations and has been involved with Water For Good since 2010.

Any questions regarding this transition should be directed to Doug Brennan (Board President) dbrennan@waterforgood.org.
Social Share