Jim Hocking, founder of Water for Good and former missionary to the Central African Republic, is featured in this week’s the paper, a weekly shopper that is delivered to homes in Kosciusko County, Indiana. (Water for Good is a cooperating ministry in the Fellowship of Grace Brethren Churches. The Hockings are also members of the Winona Lake, Ind., Grace Brethren Church.) A portion of the story appears below. Click here to read the complete article (on page 2 of the publication). 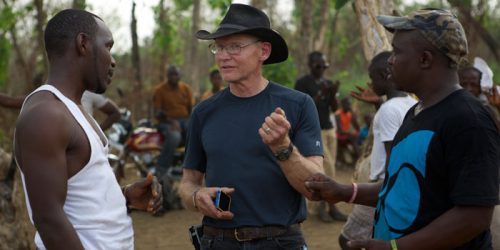 Warsaw, Ind., resident Jim Hocking speaks with two villagers in one of his numerous visits to the Central Africa Republic.

Although Jim Hocking considers Warsaw home, you’d be hard pressed to find him there watching the grass grow. Hocking and his wife, Faye, bought their home 20 years ago. Although each of their four children attended Warsaw Community High School at some point in time, most of their childhoods were spent in central Africa.

Hocking was raised as the son of missionaries in the Central African Republic, a landlocked country of nearly five million people and, by nearly all metrics, one of the poorest countries in the world. Born in Warsaw in 1954 where his father was a seminary student, Hocking moved to the CAR in 1957, where he went to school and spent most of his life.

Hocking eventually became a missionary in his own right, prior to moving back to northern Indiana. Despite moving stateside, his heart and passion remained in Africa, noting “I learned the Sango language before I learned English.”

In 2004, Hocking founded Water for Good, a faith-based, non-denominational, non-profit organization whose stated mission is “empowering people with sustainable access to clean water and transformational sanitation principles.” They do so by providing well drilling and well maintenance to villages in CAR, allowing access to clean water to thousands of people.

Click here to read the complete article (on page 2 of the publication).