Jim Kessler to be Honored by Indiana Basketball Hall of Fame

Former Grace College head basketball coach, Jim Kessler, will be honored by the Indiana Basketball Hall of Fame in 2020, according to a story in yesterday’s Warsaw, Ind., Times-Union. A portion of the story appears below. Click here to read the complete article. 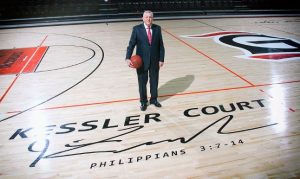 The Indiana Basketball Hall of Fame Board of Directors announces the 2020 Men’s Induction Class to be honored on March 25.

He has served as a court coach for USA Basketball, hosted a coaches clinic at the NCAA Final Four, led Grace on international missions trips to at least eight countries and has directed over 20,000 campers at the annual Lancer Basketball Camp.

Kessler is a 1966 graduate of Northwest H.S. in Hughesville, Missouri. He resides in Winona Lake.