Jim Woolman With the Lord 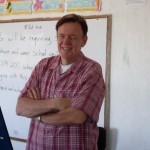 James “Jim” Lloyd Woolman, 58, of Arlington, Wash., died May 1, 2010 in his residence after a two-year battle with kidney cancer.

In 1979, he began a Christian academy in Des Moines, Iowa, before moving to Washington in 1983 to train for the pastorate. He spent his life in the ministry and Christian education.

He was preceded in death by his parents. His father, Lloyd Woolman, long-time coach, athletic director, and dean of men at Grace College, died in February, 2009, at age 84.