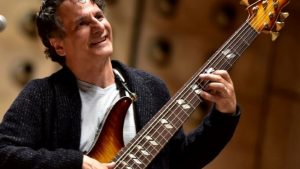 The Grace College Worship Arts program welcomes two-time Grammy award-winning jazz bassist John Patitucci to campus on Friday, Nov. 8, to speak at chapel and perform an evening concert.  Patitucci will speak at chapel at 10:30 a.m. in the MOCC, 610 Wooster Rd., Winona Lake, Ind. Then he will collaborate with Worship Arts students for a Jazz Vespers Concert at  7 p.m. at First United Methodist Church, 179 S. Indiana St., Warsaw, Ind. Both events are free and open to the public.

“This is a truly special event,” exclaimed Dr. Walter Brath, assistant professor of worship arts at Grace College. “To have a musician of such distinction perform at Grace is an honor in itself, but to have him share his journey as a Christ-follower and a world-renowned musician in chapel is a treat,” stated Brath.

Patitucci was born in Brooklyn, New York, in 1959 and began playing the electric bass at age 10. He began performing and composing at age 12. His eclectic tastes caused him to explore all types of music as a player and a composer.

Patitucci studied classical bass at San Francisco State University and Long Beach State University. In 1980, he continued his career in Los Angeles as a studio musician and a jazz artist. As a studio musician, Patitucci played on countless albums with artists such as B. B. King, Bon Jovi, Sting, Queen Latifah, and Carly Simon. In 1986, Patitucci was voted by his peers in the studios as the National Academy of Recording Arts and Sciences MVP on Acoustic Bass.

Patitucci’s talent quickly made an international impression; since 1985, his association with Chick Corea has brought him worldwide acclaim and put him at the forefront of the jazz world. His many recordings with Chick Corea’s Elektric Band and Akoustic Band, his six solo recordings for GRP Records and his subsequent recordings have brought him two Grammy Awards and more than fifteen Grammy nominations. In addition, his first solo recording went to number one on the Billboard Jazz charts.

Currently, Patitucci is a visiting scholar at Berklee College of Music, teaching in both the Global Jazz Institute and the Bass Department. He resides in New York with his wife Sachi, a cellist, and their two daughters. To learn more about his career in the arts, visit his website, johnpatitucci.com.

“John’s accolades speak for themselves. This is a performance you won’t want to miss,” said Brath.

Tickets are not needed for chapel or the concert; both events are free and open to the public. For more information, contact Walter Brath at brathw@grace.edu, or 574-372-5100, ext. 6351. To learn about Grace College’s Worship Arts program, go to grace.edu/major/worship-arts.