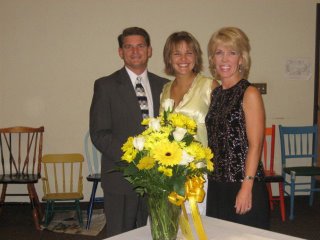 Lakeland Christian Academy, Winona Lake, Indiana, has named Jordan Byers (center, with Brent and Brenda Byers) as salutatorian for the Class of 2006 and has also named her as one of two Timothian Award recipients.

Lakeland Christian Academy’s faculty awards a Timothian Award to the graduating senior who best exemplifies the spiritual exhortation found in I Timothy 4:12: “Don’t let anyone look down on you because you are young, but set an example for the believers in speech, in life, in love, in faith and in purity.”

Jordan Byers is the daughter of Brent and Brenda Byers and Laurie Waid, Warsaw, Indiana. She earned a grade point average of 3.9533 on a 4.0-point scale. Byers was a member of the National Honor Society and was on the all-A honor roll all four years.

She is planning to attend Moody Bible Institute in the fall with a major in international missions. Byers attends Winona Lake Grace Brethren Church.