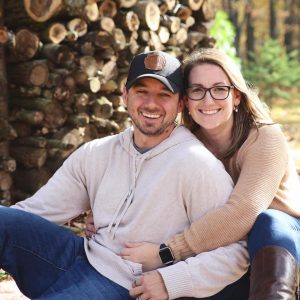 Josh and Lindsey Knipple knew there were needy families in their community even before Covid-19. Johnstown, Pa., had once been a thriving coal and steel town, but as those companies closed or left, the local economy suffered. As a result, residents were left without jobs, or could only find low-paying ones at best.

When the couple saw a church in nearby region was serving more than 1,000 needy families in a weekend, they decided to get involved at home. “Where we are, there was a food need even before the pandemic hit,” he says.

He gathered fellow members at Liberty Grace Church in Johnstown, Pa. (Doug Black, pastor), made contact with organizations that could provide food in bulk quantities, and partnered with other churches in their community through an organization called Greater Things Ministry. “Many churches were looking for places to do ministry,” he adds. 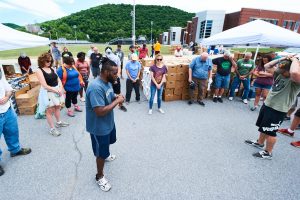 The result was a bi-weekly effort to deliver produce, meat, fruit, and other perishable items to the impoverished in the region.

Twenty churches in the Johnstown area jumped on board, providing funding and volunteers to help. (It costs more than $3,000 each time for two semi-truck loads of food.)

The first event was held at Beulah United Methodist Church in Johnstown. He says that the response was so overwhelming that it was moved to the local high school, where it’s continued to be held.

Since early May he estimates they have served about 500 families a week. Volunteers arrive early to help sort help sort items into boxes for easy delivery, then stay to load items into the trunks of recipient’s vehicles. Local police and fire departments are on hand to direct traffic. 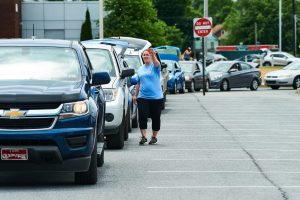 “We have been able to be the hands and feet of Jesus,” says Josh. “It’s been awesome seeing high school football players from rival schools serving together.”

Every vehicle gets one box loaded with 35 to 40 pounds of nutritious, fresh fare. A tent nearby offers patrons the opportunity to pray with someone, if desired. “There are five to six women who say they can’t do much, ‘but I can pray,’” notes Josh.

Helping people unite for a cause comes naturally to Josh, a former pastor who serves as connection director with Crucified Ministries in Johnstown.

While the food drive initially was held every two weeks, they have since transitioned to a monthly effort. “It’s an incredible thing when churches are able to work together across denomination and across race,” says Josh.

“Josh and Lindsey have a passion for meeting the needs of our community,” says Pastor Doug Black. “The food distributions have given hope to families and built relationships across all of the churches and ministries in our area. I am so thankful for their hearts.”