Alicia Blosser, a part of the family at Grace Community Church, Goshen, Ind. (Jim Brown, senior pastor), and the story of her recent heart transplant was featured in the August 16, 2019, edition of the Goshen News. A portion of the story appears below. Click here to read the complete article. 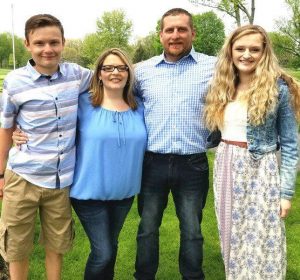 Alicia Blosser, second from left, poses with her family. From left are son Mason, Alicia, husband Anthony and daughter Kimberly.

On March 12 at 7 p.m., Alicia Blosser and her family cried tears of joy as they sat in a hospital room at the Cleveland Clinic Medical Center in Cleveland, Ohio. Alicia, who had been suffering from a number of complications from the different heart surgeries she underwent, had received a phone call telling her that a heart for transplant was located. Without a new heart, doctors said, 44-year-old Alicia would die. This phone call meant hope, the possibility of a continued life.

Speaking of her struggles, Alicia said, “It was a really bad storm. Everything needed to be perfect for things to wok out in our favor. And everything was.”

At the age of 13, Alicia was diagnosed with hypertrophic cardiomyopathy, otherwise known as HCM, a heart condition which causes the hearts muscles to become abnormally thick. She was born with the disorder, but it went years unrecognized.

Early this year, after traveling to the Barnes-Jewish Hospital in Missouri, the Vanderbilt University Medical Center in Tennessee and the Cleveland Clinic in Ohio, and after undergoing many surgeries, Alicia was told that she just simply needed a new heart.

“We spent a lot of years searching for answers. We finally received one answer: a new heart,” Alicia said. She continued by saying that she felt relieved, and that her prayers had been answered. She also noted that fear was a very strong emotion, as well.

“I just prayed God’s will,” she said. “I thought: if I should die, then that was just God’s will.”