Jumping in the Lake: The Yeiter Cold Water Challenge 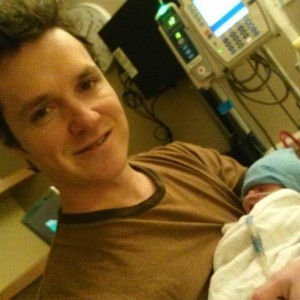 What would you do for a family in need? Would you jump into a lake on a cold evening?

More than a 120 people, many of them members or attenders of the Winona Lake, Ind., Grace Brethren Church (WLGBC), have done just that in the last week during The Cold Water Challenge — all to benefit a family whose new-born baby has health needs.

Already viral on the Internet, the challenge works when a person or group jumps into a body of cold water as they call out others in a public video. The details vary from challenge to challenge, but participants encourage others to make the jump and donate $10 to $25 to a charity or not make the jump and donate $100 — all within 24 hours. In addition, some promise to make a donation for each person who takes their challenge.

When Aaron Scantlon, a staff member at WLGBC and pastor of the new Empty Hands Bible Church, was challenged by a Grace College student, he and his wife decided to take it a step further. “We decided to jump as a family AND give $100 to the Yeiters,” he said. Sam and Celeste Yeiter’s son, Henry, was born on April 22 and needed immediate surgery to repair his intestines. Also, he was diagnosed with Down syndrome. The funds would help then meet extra expenses while the baby recovered in a Fort Wayne hospital.

The Scantlens challenged their friends, Dean and Summer Avey, “because we thought they were crazy enough to accept,” he added. The challenge caught on and numerous families — and multiple generations — have taken the plunge for Baby Henry, including WLGBC lead pastor Bruce Barlow and his wife, Christi.

To date, nearly $5,000 has been raised — some from those who have taken the challenge, but much from people made aware of the situation because of the publicity. Many, according to Sam, have come from people the Yeiters, who’ve been attending WLGBC for about six months, have never met. All but $1,100 is from WLGBC parishioners. 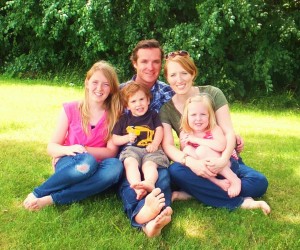 “It has been a huge emotional ride,” says Sam, 39, who returned home to the Warsaw-Winona Lake area last October with his family (including Elizabeth, 13, Nora, 5, and Jack, 3) after 15 years of pastoral ministry in the Pacific Northwest and the Chicago areas. “It has allowed me to stop working and be with my wife,” he adds, noting it has given them time to consider Henry’s future needs. “We have never felt as loved as we do right now,” he says.

The effort has not been without its spiritual lessons, according to Sam, who at first had trouble accepting the gifts. “I’m happy to extend grace,” he admits, “but it’s harder to accept grace.”

He shared some thoughts from Celeste, 38, who grew up in the Winona Lake church: “We learn Psalm 23 when we’re children, but it’s weird, and we don’t really know what it means. But now I do. I know his green pastures, I know his still waters. He has just been showing us over and over that he will provide for is. When it’s money we need he gives that. When we need rest, he gives us rest. And he has prepared a feast for us in the presence of our enemies — fear, anxiety, and anger.”

While Sam knows there might be more money coming in, he says their needs have been met. Additional gifts will be reserved for future expenses related to Henry’s special needs.

The videos are posted on an open Facebook page, Henry Yeiter Cold Water Challenge, and Scantlen has compiled highlights of many of them into a 10-minute video on YouTube. Themes range from Star Wars and Duck Dynasty to contemplations of how to do a Cold Water Challenge. Check out the highlight video below.