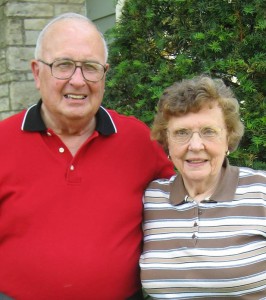 Word has been received of the death of Kathy Herman, a long-time fixture in Grace Brethren offices and the wife of Ken Herman, who worked with the Brethren Missionary Herald Company, the parent organization of GraceConnect, for 33 years. Her obituary appears below.

She was a 1946 graduate of Stivers High School in Dayton, Ohio, and attended Miami Jacobs Business College for a year. She worked as a secretary for the Brethren Youth Council, Winona Lake Grace Brethren Church, Brethren Architectural Service, and Grace Brethren International Missions, retiring in 1997.

Memorial contributions may be made to Jared and Kim Meidal (granddaughter of Ken and Kathy serving as missionaries at The Oaks Camp with World Impact); c/o Don Fluke, 2503 Western Drive, Winona Lake, Ind.  46590.