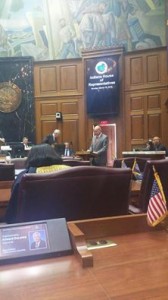 Dr. Bill Katip speakers to the Judiciary Committee of the Indiana House of Representatives.

Dr. Bill Katip, president of Grace College and Seminary recently testified before the Judiciary Committee of the Indiana House of Representatives in favor of proposed Indiana Religious Freedom Restoration Act (SB101). The online news site, InkFreeNews, carried a report of his testimony. A portion of the story appears below. Click here to read the complete article.

The bill, which passed with a 9-4 vote by the Indiana House Judiciary Committee, will now progress to the full House for consideration.

Supporters of the hotly debated bill claim the bill will legally protect those with strong religious beliefs, particularly in the case of business owners who would like to refrain providing services for same-sex couples.

Those in opposition to the bill argue the bill would allow for discrimination against same-sex couples.