No one can predict crisis. The eye of the ‘storm’ is fierce and has no preference to where it may strike. Scripture says, it ‘rains on the righteous and the unrighteous.’

According to the White House Office of Faith-Based and Community Initiatives there was “record-setting giving and countless acts of compassion following Hurricanes Katrina. This reflects America’s tradition of generosity and sense of responsibility to care for our neighbors in need. The American people gave more than $3.5 billion to aid citizens impacted by the Hurricanes through individual gifts and corporate and philanthropic donations.

In the face of disaster, those of us who call ourselves followers of Jesus should be on the front- line of helping people who are looking for assistance and support for healing.

In a poll conducted by the American Red Cross showed that in the face of crisis:

What are the questions we hear from people affected by crisis and catastrophe?

What is God’s response?

“For his anger lasts only a moment, but his favor lasts a lifetime; weeping may stay for the night, but rejoicing comes in the morning.” Psalm 30:5

…and then…on that final and glorious day

“He will wipe away every tear from their eyes, and death shall be no more, neither shall there be mourning, nor crying, nor pain anymore, for the former things have passed away.”

Ten years ago, I flew to Houston and traveled to Baton Rouge to simply serve. I engaged. I listened to the heart of God. I obeyed. I went! I had no idea what role I would play or what title I would have.

The night of arrival, a little old lady and a Red Cross director said to me, “we believe God sent you here and you are here to help lead us.” 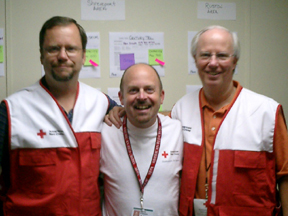 The Lord would allow me to serve eight mega-shelters as lead supervisor for the Red Cross. Each of those shelters had 3,000 to 8,000 people in them. Our amazing team of volunteers would service more than 100 church-based shelters. We would shelter, feed, care for, and assist people in finding their families. The scope of work was overwhelming. The money needed to care for people’s physical needs was staggering.

I called Dave Guiles (executive director of Encompass World Partners) who had previously called me to encourage and pray for me in my role.

He had said, “If you need anything call.”

I called! I asked, “You have a program called Rapid Deployment….do you mean it?” I told him what I needed and the next day I had eight proven, tested, and effective leaders that gave three weeks of non-stop service. I gave them a crash course in the Red Cross and they ran each of our shelters.

What? Really? I went not knowing if I would be scrubbing toilets or that I would become the top leader of Red Cross operations in 10 counties, directly reporting to the head of the entire operation, spending millions and millions of dollars.

I thank God for a family of believers who demonstrate the love of God to a people in crisis. It has been a privilege for me to serve the FGBC in the past decade in the face of crisis. I personally want to thank each person who served and who gave to help the people who whose lives were devastated by Katrina. Your investment was physical and spiritual. When you chose to engage you shared the heart of your Father. You looked a lot like Jesus.

We don’t know when the next Katrina will hit, but the face of disaster is imminent.

This week. We remember Katrina. Pray for the families who lost loved ones. Thank God for the first responders who put their lives on the line to provide physical and spiritual care.

Your investment in crisis and catastrophe makes an eternal difference. — by Dan O’Deens

Editor’s Note: Dan’ O’Deens, founder and executive director of CPR-3 and former pastor of Gateway Church, a Grace Brethren congregation in Parkesburg, Pa., was among the first responders to help in the wake of Hurricane Katrina.

Flashback to Stories from 2015

In 2005, the BMH Editor’s Blog, the predecessor news site to GraceConnect.us, carried a steady stream of stories about the involvement of Grace Brethren churches and ministries in recovery efforts after Hurricane Katrina. Here are a few stories, in no particular order. To read other reports, type “Katrina” into the search box at the top of this page.